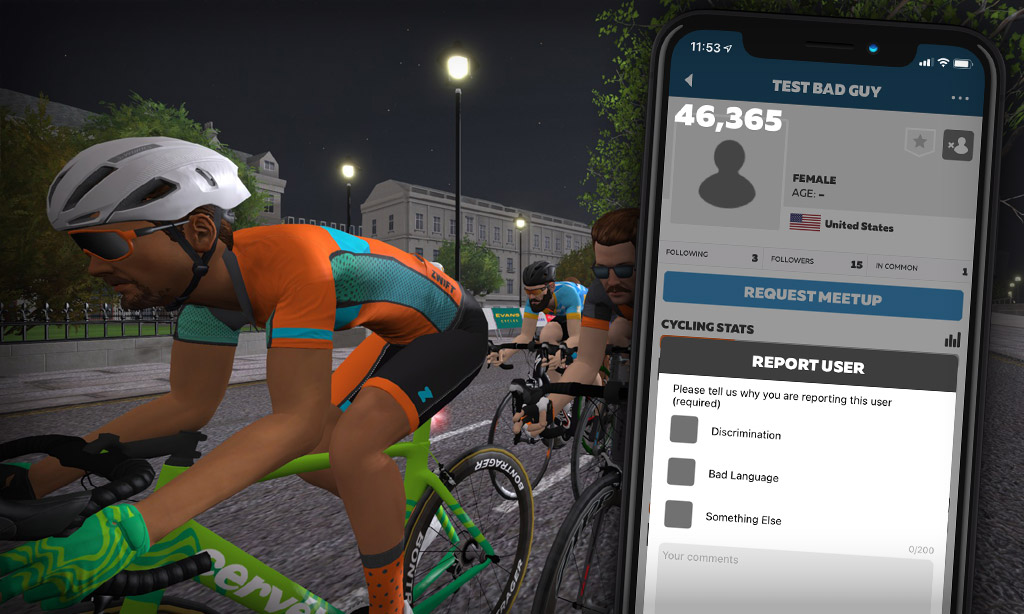 The latest version of Zwift’s Companion app (v 3.25) includes modified reporting features designed to foster an “inclusive, respectful, and fair environment in which Zwifters from all over the world can thrive.” Let’s take a look at how Zwift’s reporting tools work…

The existing “Flag User” feature has been in place for years, but its functionality is quite limited (and a bit mysterious). More specifically:

While “Flag User” is still an option in Companion, Zwift’s new “Report User” functionality is much more robust, addressing some of the limitations of old flagging tool:

(Our guess is that “Flag User” will go away soon, or simply link to the “Report User” UI, as two separate reporting mechanisms on the same screen is a bit odd.)

Reporting a user is a simple process in the Companion app:

So what actually happens after you report a user? This isn’t entirely clear, but we can gather some clues based on Zwift’s recent forum posts on this topic. Here’s an excerpt from the original announcement a few weeks back (emphasis added):

An expansion to the existing flagging feature, the reporting feature allows riders and runners to report discrimination, bad language, or other forms of harassment in real-time by clicking the three dots in the upper right-hand corner of a member’s ZC profile. This feature will allow our team to monitor the situation and enact shadow banning when appropriate.

It sounds like the report user feature is feeding directly to Zwift support personnel who can see the reports as they come in. in real-time, even taking action while the offending rider is still actively Zwifting. It’s possible we’re overstating this, though – Zwift support staff may not be equipped or even expected to respond to situations in real-time.

If you’re curious about the term “shadow banning” – this is a well-known tactic used against trolls and other bad actors in online communities. It has also been used by Zwift as well. Being shadow banned on Zwift means you can still use the product, but nobody else will see you or your messages. Essentially, it’s not obvious to the banned Zwifter that they have been banned – but they can no longer negatively affect others.

Honestly, has anyone ever had to flag anyone for bad language or discrimination? I know I haven’t. Yesterday I saw someone holding 8.7 wkg up the Alpe! I calculated his weight was 20 kgs! There should be a weight button.

Honestly, though, you aren’t pedaling hard enough if you’ve got time to flag and report all the fliers on the Alpe. Unless it’s part of a race, why should you care? Flagging other people’s wattage shouldn’t even be possible under 6 w/kg, IMHO. The speed of people free riding in my vicinity doesn’t concern me, and I’m usually too busy watching my own pace to be able to scroll the right side of the screen looking for unusually fast riders to flag. Development time could be better spent launching a Mt. Fuji before my birthday next month.

I think if you hold over 6 w/kg, zwift puts a red triangle next to your name (like the green triangle in crit city) and you are excluded from all leaderboards until u log out. But I still see people who (purposefully) avoid this rule by holding 5.9 w/kg all the way up the alp. Their name is like @kazuki kzk(krg) and i see them everytime i go up the alp, holding 5.9 w/kg. And I go up the alp a lot. so something else should be done (not sure what) but it is still a problem. I agree that… Read more »

Shadow banning is a really powerful tool that I’m weirdly afraid of to ever experience. It’s like being stuck in The Sixth Sense ﻿😅﻿

you CAN affect races and outcomes of other riders – its hilarious

How do they ensure every ban is legit? If someone maliciously report me and get me banned, I won’t even know I’m banned and cannot appeal.

Harassment? But we’re all just a bunch of cartoons.

I think if you get flagged by 3 or 5 users your avatar slows to a crawl. I know this because AHDR has used it on me in the past in their group rides. Most recently last Friday because I complained about their conversation only being about controlling the group. 99% of the comments in the first 20 minutes were about controlling the group. And they were coming every few seconds. Most group rides have accepted fliers (To be clear I was NOT a Flyer in this ride) but AHDR simply flags them to get them removed from their ride… Read more »

I had the same experience. They all seem to be on a massive power trip. There’s about 10 leaders all constantly spouting same thing and barking unnecessary threats even when the group is tight and complient.

Exactly my experience. Might make a good story but it wouldn’t be a “Feel Good” piece so probably never see the light of day. Glad to know I’m not the only one that’s had that experience.

A story about how good intentions can pave the road to hell. I’m sure it was a very good ride at one time but they’ve lost focus and haven’t been able to leave the old “Fence” mentality behind.

I gave up on group rides- you’re right about some of the ride leaders on power trips. And I once reported one of THEM to zwift. I just do the pace partners now. If I need to go faster, I just spot the group a lead then chase back on (though a few times I spotted them TOO much lead 🙂 ) or find another group going a bit faster as they always seem to form off the front of Coco group at least. Need to go slower? Well, just go off on my own or drop down to slower… Read more »

I wonder why still so many people join them if the experience is so bad. I never do group rides except those “group rides” like TOW or TDZ.

Hmm, you REALLY made a “bad guy” female!?!?!?!? Not sure that is the way gender equality is meant to work… ﻿🤔﻿Thanks for another “notch in the belt”, so to say!

Oh, come on. This is Zwift. I’m sure it wasn’t on purpose.

Can I report Excessive Sensitivity?

The point was to make the account look suspicious. Dudes signing up as ladies is definitely a thing that happens on Zwift… and let me tell you, the ladies don’t love that.

Yeah, don’t you guys write articles about them and how good their ‘data strategy’ is?

This is all rather pointless. Zwift has never been known for cracking down on anything. After all, they still steadfastly refuse to give race organizer the ability to prevent zpower riders from entering and often times wreaking havoc in their events. So someone calls you a bad name and you’re upset another to cry about it … What sort of punishment is Zwift actually going to dole out? Bully or not, your still a paying subscriber, and in the end, that’s all Zwift is really concerned with.

I got a penalty because I got mad at a cat. A racer who joined as a D in a race and raced in a group of mostly B’s. Thanks Zwift.

For those who are also getting fed up more and more with Zwift HQ, check out this: https://www.youtube.com/watch?v=Mwl2UOzM9Kg. They are only in the beta phase, but boy this is exciting!

they’ve been in the beta phase for a while, and its invite only.

so not that exciting

It’s 1000 times easier to get an invite than to talk with someone from Zwift.

from what im hearing, its not… you have to wait a long time even to hear back, and most people dont get accepted even then

It took me 5 minutes.

The real scarry thing here is “when appropriate”. Who decides when giving a rider a penalty is appropriate? What’s a fun joke for some is offensive for others. Just give people the option to block certain riders so they never see their text again in the future. Problem solved. Now fix the cheaters and racers entering the wrong race categories!

Seems like they’ve just made it ever-so-slightly harder to report fliers. I’ll keep reporting every zpower over 4w/kg. “You can take away my ‘report flier’ button but you can never take my..my..”

I am coming to appreciate the “hide the HUD” feature more and more. Can’t see harassment if everyone’s silent….

Hi Eric, any news on the new update today? Not sure if anything changed or not…

No news yet… I know a couple new assets were included (team kits, etc)… but nothing significant I can find. I’ll publish something if we find something newsworthy!

Brilliant zwift. Another kick in the Teath to community racing trying to keep racing fair and interesting. If we can’t flag and kick the 100kg guy doing 5w/kg constant for a race. This will just suuuuuuck. If this is happening I am tapping out because I don’t want to sign up for yet another motorpaced derny race again. It’s soo dull. And to all the zpower racers out there saying the don’t understand. Get a clue. If you’re putting out pro stats and at the front of the A’s. Or chasing down all the breaks. The least you can do… Read more »

Honestly, I think the cheaters must be flaged and banned… there are so many guys that could be an olimpic champ!!! We alredy have maths and AI developed to auto ban all cheaters. I have never watched a racism or things like this… but could be follow too by AI and instantly be banned….

I recently come off a shadow restriction on zwift.. They email you a link to the rules of Zwift and tell you what it is for .. I replied to my with my view but never heard back. You can see everyone and still draft but you do not show up in the results and others can not draft you ..Your Kilometres on Companion still click over and people can still drop in on you .. You can still drop in on others but you can not add followers.. I personally think most new Zwifters ride AHDR because it’s pumped… Read more »