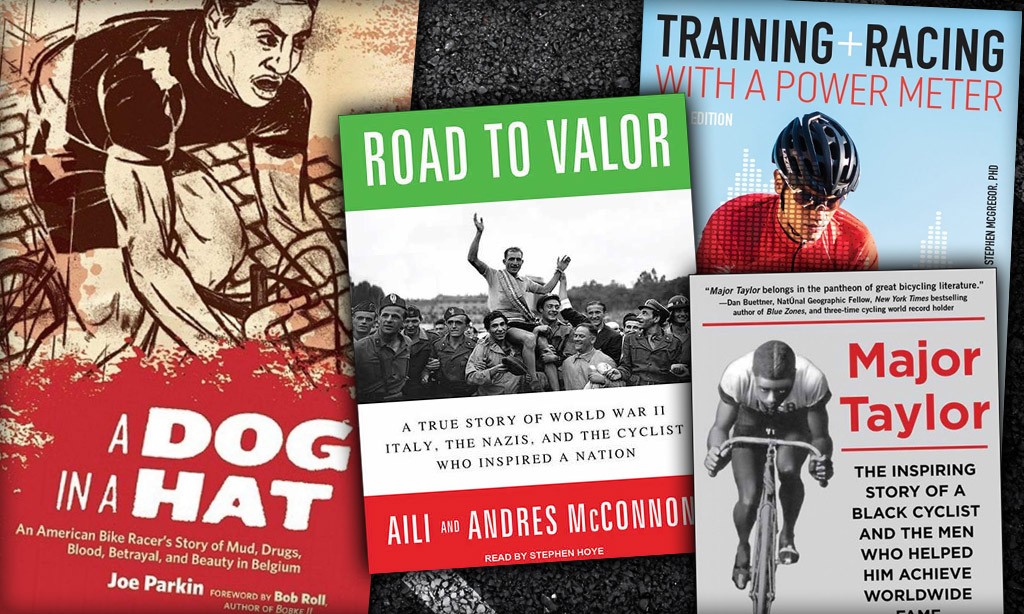 I’ve selected two stories of pro cyclists who rocked the world in different ways (Road to Valor and Major Taylor), a gritty look at becoming a pro racer in 1980’s Belgium (A Dog In a Hat), and one of the most highly-recommended training manuals available today (Training and Racing with a Power Meter). Enjoy!

A True Story of WWII Italy, the Nazis, and the Cyclist Who Inspired a Nation

Gino Bartali is an Italian cycling legend who not only won the Tour de France twice but also holds the record for the longest time span between victories. He first won in 1938 at the age of 24, then won again 10 years later. A lot happened in between, including Bartoli’s secret work to save Jews during the war.

Based on nearly ten years of research, Road to Valor is the first book ever written about Bartali in English and the only book written in any language to explore the full scope of Bartali’s wartime work. An epic tale of courage, resilience, and redemption, it is the untold story of one of the greatest athletes of the twentieth century.

Training and Racing with a Power Meter

Modern cyclists have access to more trainer data than ever before – but what do you do with it? This latest edition updates what has become one of the top training guides for self-coached cyclists.

Pioneering cycling coach Hunter Allen and exercise physiologists Dr. Andy Coggan and Stephen McGregor show how to use a power meter to find your baseline power data, profile your strengths and weakness, measure fitness and fatigue, optimize your daily workouts, peak for races, and set and adjust your racing strategy during a race.

A Dog In a Hat

In 1987, Joe Parkin was an amateur bike racer in California when he ran into Bob Roll, a pro on the powerhouse Team 7-Eleven. “Lobotomy Bob” told Parkin that, to become a pro, he must go to Belgium.

Riding along a canal in Belgium years later, Roll encountered Parkin, who he described as “a wraith, an avenging angel of misery, a twelve-toothed assassin”. Roll barely recognized him. Belgium had forged Parkin into a pro, and changed him forever.

A Dog in a Hat is the remarkable story of the un-ordinary education of Joe Parker and his love affair with racing, set in the hardest place in the world to be a bike racer.

“Before Magic, before Ali, before Jesse Owens, there was Major Taylor.” ~Bob Roll

At the turn of the century, one of the world’s most popular athletes was a black bicycle racer named Marshall Walter “Major” Taylor. Known throughout the country, he was the fastest man in America and the first African American cyclist to achieve the level of world champion. But he still faced the virulent racism and belittling treatment that was a daily occurrence for so many.

What do you think?

Have you read any of these books? Got others you would recommend? Share your thoughts below!

You really jump-started my cycling reading(listening to audio books) with your last post. Since then I’ve read The Rider, The Secret Race, and Slaying the Badger. I’m currently reading Pro Cycling on $10 A Day by Phil Gaimon.

I’ll have to add some of these books to my To-Read list as well!

I want to say The Rider has probably been one of my favorite books about endurance competition, I absolutely loved it. When I was finished I started over from the beginning and read it again.

you might also enjoy Michael Barry and his Le metier 😊

Road To Valor was an incredible book and story. Major Taylor has been on my list for a while so I definitely need to get to it.

Agree that Road to Valor was a fabulous book. Just finished William Fotheringham’s new book, The Greatest — the Times and Life of Beryl Burton. I had never heard of her and found the story of this female pioneer quite fascinating. Also enjoyed the view of cycling culture in England in the 50’s and 60’s.

I thought that David Millar’s ‘Racing Through the Dark’ was a great read. Millar comes across as honest and revealing, without looking for any sympathy. A good insight into the dark doping days… if there is such a thing!

Any recommendations for tv shows or movies/documentaries (outside the obvious like Sunday in Hell)?