How the Race Was Won: An IRL Style Zwift Race 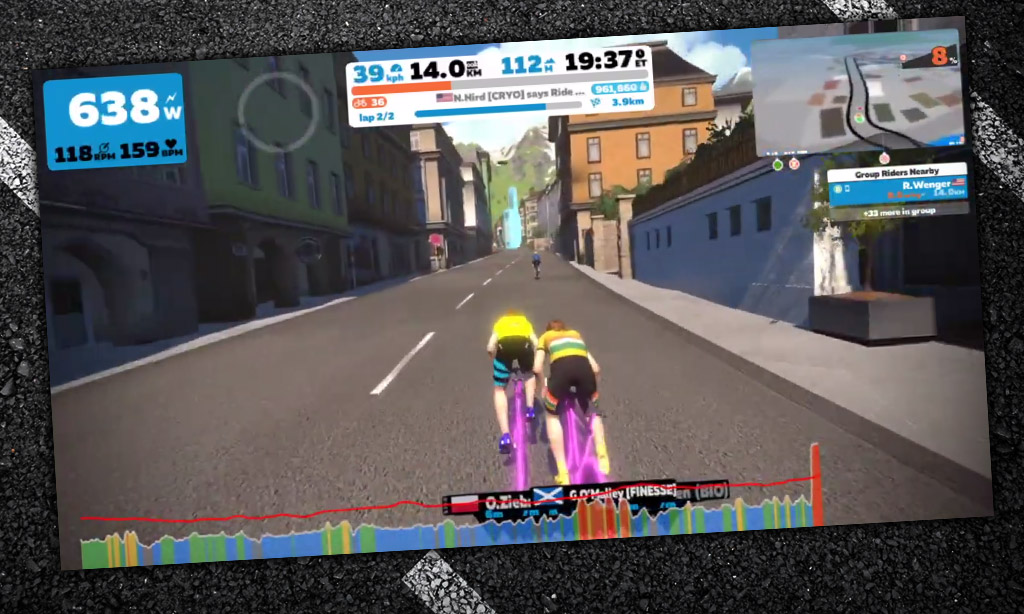 Have you ever wondered what a Zwift race would be like if it mimicked an outdoor road race in real life? Due to a bug in one of last week’s races, I found out.

(For a little background on me: I race in Cat B and am really into race ranking. I’ve come to find my favorite race of the week is the Oh My Crit! Double Race and it just so happens this latest one was 2 laps on my favorite Zwift course, Innsbruckring. Little did I know I was about to have THE experience with this one.)

I did my normal warmup for these Thursday races:

Since it’s my favorite race, I’m well aware I only race against Cat B racers. On this race day, I got in the pens and saw a few A+ Zwifters I knew. What? Not good. I considered dropping out of the race and hopping into the A group to see if I could get a better ranking but thankfully, I didn’t. The A’s took off from our pen one minute before us. Crisis averted.

The race started and I immediately noticed a weird anomaly on the screen: I could ONLY see Cat D racers and myself. Within a couple minutes, those Cat D racers disappeared and I could only see myself. What was going on? We were going REALLY slow and about 3 minutes into the race it was confirmed by someone else: none of us could see other racers’ power or position. I realized this was going to be like a real-life bike race (except this time, I’d be racing with better hair). Check out the screenshot:

This is where things got interesting. During the first time up the Leg Snapper, a guy I had raced against a few times, Gregg O’Malley, blasted past everyone and opened up a gap. I knew he was a high-ranked Zwift Cat B racer and really good tactically, but I still figured he would get chased down. It was weird though, because our pace remained pretty slow. He ended up holding the lead for four minutes and we caught him just before the start/finish line on the first lap. But it showed me something: normally breaks like that only last a short time but Gregg had stayed away for a long time. The field was hesitant because the racers couldn’t see what others were doing and decided to let the gap remain further out than normal.

I immediately hopped on the Zwift Companion DM’s and messaged Gregg, hoping he remembered me, and asked, “Do you want to start a break?” His response was, “We can try, but I was getting nowhere when I was off the front before!”

Here is a picture of Gregg and I at that moment:

It was on. We sent a couple of messages back and forth resulting in him messaging me with, “We are gonna have to go hard up the hill” to which I responded, “I will go all out”. I knew he was stronger than me so I figured I could go all out without fear of dropping him. I just hoped he wouldn’t drop me.

We reached the Leg Snapper on Lap 2. Gregg and I hammered up and built about a 30-meter gap on the field. I was banking on the fact that the field couldn’t see the gap or our W/kg. One thing I didn’t think about was that we also couldn’t see how far back the field was, so it was a scary few minutes trying to make sure we stayed away. So we just kept the pressure on as much as we could the rest of the race, switching out pulls. (Ok, so maybe “switching out” is a bit generous. Maybe Gregg was leading 90% of the time but… who’s counting?) If you want to see the attack check out 22:22 on my video.

With about a minute left, I received this message from Gregg: “I’m too ***** tired to sprint now so just make sure you can take it.” A better person than me would have argued, but I just took the win, which also was my first official Zwift win along with the chance to get a photo of results before everyone else finished!

What do you think about the idea of Zwift giving race organizers the option to remove the right-hand bar? Have you ever worked with another Zwifter to make a break? Share your stories and thoughts in the comments below! 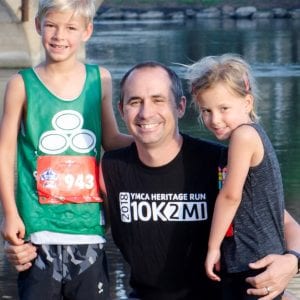 Rick is an Industrial Energy Efficiency Engineer living with his wife and two kids living in Northern Illinois. He promises that if he isn't doing a workout or race he will return your Ride On. Follow him on Strava or check him out on ZwiftPower.

Enjoyed the article. Thanks for sharing

No problem Jeff…glad you liked it!

This is a great idea, but when in the break, should/must have the capability to look back using the camera angle for a certain distance at least as that is something a person can do on the road, but with limited visibility and maybe having a slight impact on watts when looking back. This will avoid people looking back the whole time and they will be penalized. Love the article and would love to race in this way.

Thanks Francois! It was really fun even without a rear view camera, but I love that idea!!!

This is a great idea, but when in the break, should/must have the capability to look back using the camera angle for a certain distance at least as that is something a person can do on the road, but with limited visibility and maybe having a slight impact on watts when looking back. This will avoid people looking back the whole time and they will be penalized. Love the article and would love to race in this way.

Fun-to-read aticle 🙂 To me, this option sounds interesting, indeed! Would love to try a Zwift race “without radio”.

CLF – Glad you enjoyed it! It was incredibly fun and I would definitely prioritize these types of races if they had them. It added so much strategy. You had to actually decide to follow a break instead of just watching the gap like you can now.

Dude, this article had me excited and giddy. Go figure. I’m preparing my body to begin racing again after a 10+ year layoff. Zwift racing has gotten me excited about cycling.

Cheers and Thank you!

Angel – I can’t tell you how happy this makes me! I’m so glad you liked the article!!! Good luck racing and Ride On!

(And one major tour w/o visible power meters, only available after race to teams.)

Glad you liked the article Jordan!

That’s the best one I have read. Well done

Thanks Brett…glad you enjoyed it!

Great write up! Cracked me up too! We had the same thing happen in the EMU Road to Ruins race on August 20th. No leaderboard and no way to know who was doing what to whom. I was one of the only riders to do the bike switch and I imagine the other riders not knowing what power I was putting down but watching me ride away from them had to be disconcerting. It really gave the race an added dimension and I wouldn’t mind seeing it again. More like a race in Ireland and less like a video game… Read more »

Thanks Mark! I really hope they consider making it an option. I love that it happened on R2R – that would make it even crazier.

I’ve had this exact glitch. Makes for a much more Interesting race. Would like a more bare-bones racing experience as it seems to create more unpredictable scenarios

For sure! I would love to see both. It would also make “team radios” like discord more important and improve team tactics. Sometimes I do like seeing what everyone is doing, but I am leech in the pack ﻿😀﻿

Everytime I read one of these it makes want to go race immediately.

Great break – thanks for sharing.

Thanks Tristen – I’m glad you enjoyed it!