How the Race Was Won: Announcing the Attack 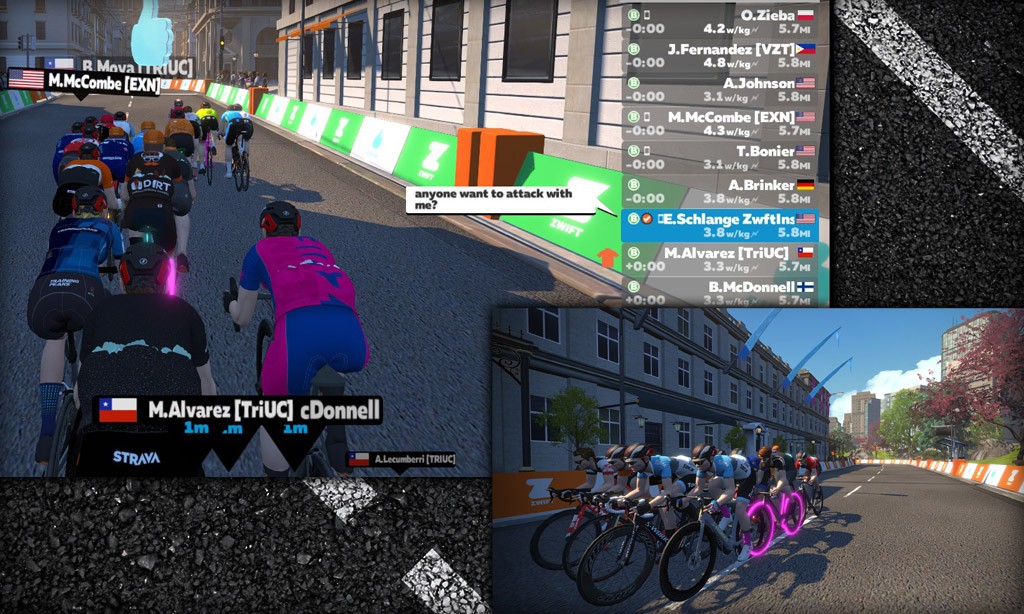 One thing I really enjoy about Zwift racing is the ability to try new tactics without risking much. Whereas an outdoor race might cost me a $40 entry fee plus several hours of driving (and associated costs), racing on Zwift costs me almost nothing at all. The time commitment is minimal, there is no risk factor, and there’s no entry fee!

Sometimes I come up with hair-brained race tactics beforehand – I’ve written about plenty of those. Other times, the ideas strike mid-race, like some sort of divine lightning bolt. Today’s race was the latter. And the best part is: it worked! Here’s the story…

I grabbed just one piece of caffeine gum and rubbed some PR lotion on my legs. Then it was off to Watopia for a ~45 minute warmup before my race at 6:35am. This time around I hopped into a group ride led by my buddy Peter McKenzie because the stated pace (2.7-3 w/kg) was just right for a warmup, once I threw in a sprint or two.

After a nice warmup spin with Pete and crew, I headed to the start pens. Eight laps of “Bell Lap“, which is actually the direction I prefer on Crit City. Let’s race!

We had a mid-sized group with 42 starters in B cat. As usual, the start was hard and fast, and the selection was quickly made – halfway into the first lap a group of ~20 was off the front.

As we began the second lap, I noticed the rider on the front our group, one z-powered “J Kippen”, was holding steady between 5.5-6.5 w/kg. Some riders were struggling to hold his wheel as he kept pushing unrealistic power numbers, so I messaged the group: “Kippen is a flier. Let him go?”

The group seemed to respond immediately, letting Kippen drift off the front. Brilliant! I felt bad for the riders who had already been dropped off the front group thanks to Kippen’s Z-Power Ranger pull, but what do you do? That’s Zwift racing… for now, at least.

We had 18 in our front group, and the pace was pretty manageable. So I started putting in attacks with the help of whatever powerup I received each lap, just testing to see if others would go with me, or if I could thin the herd a bit.

As usual, nobody went with me. And I didn’t see a single rider drop from the pack either! And that’s when the idea struck, like a bolt of lightning sent from the Zwift gods: what if I announced my attack?

“Anyone Want to Attack with Me?”

My experience in over 170 Zwift races has taught me that solo attacks rarely have much effect, at least until the final minutes of the race. This isn’t the case outdoors, so what’s different on Zwift? I have some theories:

Whatever the causes, I think we can all agree that attacks are most fruitful on Zwift (and outdoors) if you can get at least a few riders to join you. But how do you do that, if you don’t have team members in the race on Discord?

What the heck. I’ll just announce my attack, and see if others want to follow.

Near the end of lap 5, I messaged the group: “Anyone want to attack with me?” Nobody responded for a bit, until one rider wrote “What’s the signal?” I didn’t have a signal, but I had a feather, and the twisty climb was coming up. So as soon as we hit it, I just wrote “Now”, activated my powerup, and hit the power hard!

A gap quickly formed several riders back. I messaged the group “PUSH PUSH” and we kept the power up for another minute or so, watching the gap grow from 3 to 5 to 8 seconds. We’d done it! We now had a front group of 8, and the chasers weren’t coming back. I couldn’t help but smile, even as I suffered. Type II fun, right?

With two laps left, our breakaway group was firmly established. We locked into a steady pace, and I held onto my aero powerup for the final sprint. No one attacked in any significant way on the final laps, so we moved into the final meters as a unit.

I activated my aero powerup just after the last left-hand turn, ramping up my power in a (rare for me) seated sprint.

I’ve been testing the Axxion Rocker Plate from Traxxion Dynamics, and I’m finding that my seated sprints are really strong due to its design/setup. My power numbers were really good for this sprint, averaging 876w for the final 13 seconds. I even had enough of a lead on the group to snap a couple shots!

My simple takeaway for this race is announcing your attacks may be a good idea. Certainly not something I would do outside, but on Zwift, I think there’s a case to be made for it, at least in certain circumstances.

I’d love it if some of you could try announcing an attack in an upcoming race, then comment below to let me know how it went.

Is “telegraphing your pass” a good idea in Zwift racing? Why or why not? Share your thoughts below!

Tim Cusick with Velocious suggest doing this IRL, by trying to get a few riders in the group to go with an attack, by telling them in advance.

This is brilliant. Seriously. Zwift dynamics are completely different; and announcing something like this is simply more entertaining. It may not have made a practical difference in the outcome, but it’s so much more fun than trying solo attacks that will definitely fail or just sitting in. I’ve considered doing it during outdoor races as well in order to actually race instead of riding around with a bunch of dudes at slow tempo waiting to sprint (which I suck at anyway IRL).

Awesome! I’ll be trying this in some Crit City races in the future! I hate the high speed group rides that lead to whoever is the strongest sprinter.

Always wanted to try this. Chapeau for having a go and making it stick. Been missing your ‘How the race was … ‘ posts. Might be fun to collate some accounts of different people trying it out.

I think this is boring but I’m censored by Eric. Only positive comments are allowed.

Ummm… ok? I’ve never censored anyone on this site. Except for spammers!

great win, your posts inspire me mid race, generally stick to crits (cat c) as I just love that threshold pain and just over a month ago id never won a single race, reading your tactics & just pure grit have led to 9 podiums including 6 wins in the past month. Thanks Eric

Great to hear, Rob! Keep up the good work. Sounds like you may be joining me in the B’s soon.

Hi Eric, well done and congrats to your win! I am certain that other zwifters had the language filter “ON”. So, not everyone saw your announcement. I feel this is good when you race internationally with many nationalities in the pen. You will get away with that. If you would do that in a race with only English speaking riders you will get more feedback. However, on Bell and Delphine loop you will find all kinds of people.

No joke, before reading this I was seriously contemplating doing this this morning in my 12 lap – Cat A dolphin lap race. Our pack was just staying too big and no one was getting dropped. I’ll have to give this a go sometime. I’ve never done it, but this is why working with a team via Discord would be really fun. Anyone interested in teaming up in Cat A races typically 6-6:30 AM PT? I usually do Crit City, but I’m game for whatever. Eric, you’re probably ready for Cat-A, right? I’ve noticed that on certain occasions the Cat… Read more »

I’ve raced with you at that time Brandon. Let me know the discord server and we’ll coordinate from there.

Congrats on the win! Much different race than your article from a year(?) ago or so titled a “Rare B Win”. Think that was the first article of yours I read actually. Any-hoo, I was in a Crit City race couple weeks ago and to team riders were actually communicating using the normal Zwift chat. The one dude writes to the other: “Get ready I’m going to lead you out with half a kilometer to go” I didn’t know if he was serious or not at first, and sure as shite, he did just that! I was able to jump… Read more »

That was interesting and fun! Congratulations on a great race and a well-deserved win, Eric.

Eric- Are you planning to do a full review of the Axxion Rocker plate? I tried to check it out on their website, but it doesn’t show much. Do you think it would work with a Kickr Bike?

I will be doing a full review soon, yes!

The plate I have wouldn’t work with a KICKR bike, because it’s just for the trainer. But they make a full length setup I believe. Which may or may not work.