How the Race was Lost: Hero to Zero 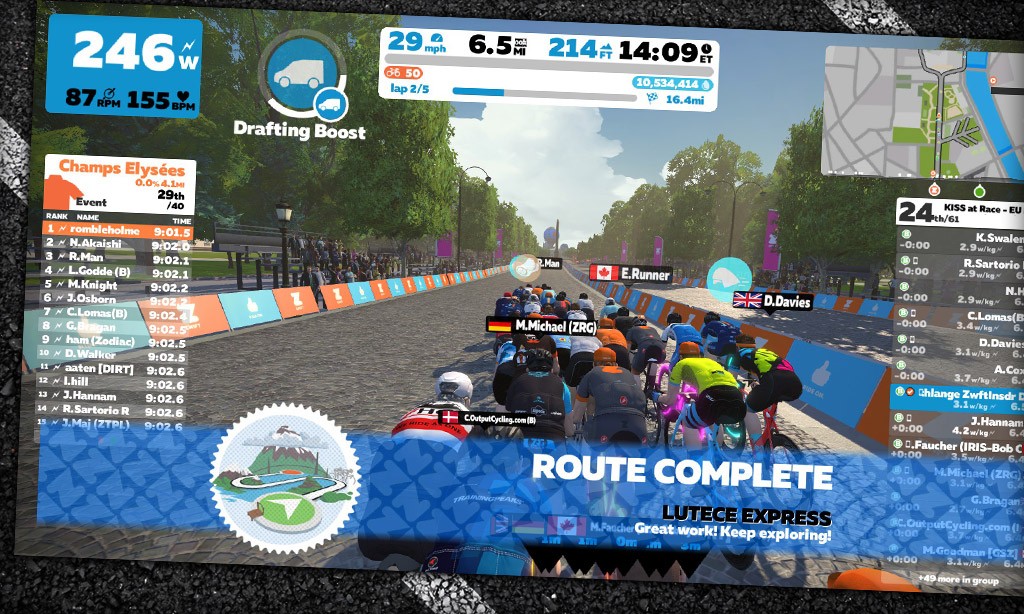 Last week at the last minute I decided to jump into midday race – the KISS at Race EU PM. I had missed my normal morning ride due to some scheduling snafus, and this particular race appealed to me because it was on a route I had never ridden before! (Sure, I had done a route recce for the route detail page I created a few weeks prior – but I had never actually ridden Paris’ Lutece Express myself.)

I did lead a Sprintapalooza ride going in the opposite direction, on the Champs-Élysées route – but riding a route in one direction does not fully prepare you to race it in the other. Today’s race would prove that point. But I’m getting ahead of myself!

I climbed on the bike about 30 minutes before the race, having chewed two pieces of caffeine gum and slapped some PR lotion on the legs. The warmup was uneventful as I raised my heart rate in a controlled fashion over a 25-minute effort out in Fuego Flats.

Satisfied that the legs and cardio system were ready, I clicked to join the race. Allez allez!

Our B pack contained 61 riders, and I had already taken a glance at ZwiftPower to see who the strongest were. There were a handful with a better ZP ranking than myself, so I tried to remember their names. The best-ranked rider had an easy name to remember – Poochiemoomoos! I’d keep an eye out for him…

The Lutece Express route is a hard push right out of the gate because you exit the start pens and immediately turn left onto the “Montée des Champs-Élysées” – the circuit’s toughest section. This little hill is only 1.1 kilometers long and climbs around 29 meters (meaning it averages around 3%). But it’s the most decisive part of the 6.6km circuit, as riders attack here every time!

It took us around 2-1/2 minutes to start the race, climb Montée, and settle in. In that time I averaged 349 watts: the cost of making the front group. Things settled down as we made our way around the Arc de Triomphe and descended toward the finish line to begin our first full lap.

We soon fell into a solid but sustainable rhythm – sort of an over-under workout with extended recovery between each hard interval. Each lap took around 9 minutes, and 2 of those minutes we were over threshold, climbing Montée des Champs-Élysées. Then we’d drop below threshold for the rest of the circuit.

The rhythm was helped by an abundance of powerups, since we rode through two banners each lap. Unfortunately, I kept getting burritos, which are pretty useless unless you’re attempting a breakaway. (Worth noting: the burrito got updated just a few hours after my race thanks to Zwift’s latest update. Now it’s quite a *giggle* offensive weapon, disabling the draft effect for all riders within 2.5m!)

Poochiemoomoos put in a solid attack on the climb a couple laps in, but nobody went with him and he was reeled in during our “recovery” stretch easily enough.

Funny “Zwift meets IRL” story: one rider messaged the group on lap 4 and said something like “Eric in da house. Never forget you pulling me Winters RR!” It was Martin Michael, a guy who joined me when I attempted a breakaway from our group during the Winters Road Race a few years back. We stayed away, but unfortunately I had jumped thinking the finish line was just around the next bend, when it was actually a couple miles away. Oops. It worked out alright in the end, but it worked out better for Martin!

Going into the final climb on the final lap, I fully expected Poochiemoomoos would attack. So I stayed near the front and kept a wary eye on him and others. But no one made a big move, so our pack of 17 riders eased off a bit as we made our way around the Arc and down the cobbles to the finish.

I was hoping for an aero powerup through the sprint banner (I had used my feather on the climb), but got the blasted burrito yet again. So I decided I would attempt a long attack, using my burrito to (hopefully) gap the pack so I could stay away.

Judging where to begin a long attack is no easy thing, especially on an unfamiliar route. If you wait too long, everyone else will be keyed up and ready to sprint as well, and you’ll just be their lead-out man. If you go too early, you’ll blow up and get passed by all the riders you were trying to beat.

Sitting a few bike lengths back from the front of the pack, I waited until it felt like the right time to go. With around 700 meters to the line I hit the gas, accelerating through the pack and using their draft to slingshot me into open air as I activated my burrito powerup.

For a few seconds it appeared I was free from the pack, but then I saw Poochiemoomoos on my tail:

As my legs and lungs began to hit the wall I looked in vain for the finish line: why was it still so far away? My power was dropping…

And then it happened – Poochiemoomoos passed me with an aero powerup flashing above his head.

I limped across the line, the next rider almost 2 minutes back. I had gone from the front of our lead pack to the very back. 1st to 17th. Hero to zero! And Poochiemoomoos, who had been favored to win, got baited into chasing my ill-fated move. He finished just ahead of me, and I bet he learned his lesson: don’t trust Schlange’s judgment!

Watch my recording of the race:

First takeaway: know the route. You’d think I would have learned my lesson with Martin Michael in the Winters Road Race, but here I am still misjudging long attacks. If possible, get on the route and free ride it before you race it. Figure out where to begin the final sprint based on landmarks and/or distance remaining. Find all the uphills and figure out how hard you can hit them and still have legs to hold on.

Second takeaway: 1 and 5-minute power are so crucial for strong Zwift race results, as Rick Wenger explained in his recent “How to Become a Zwift Top 20 Category B Racer” article. That’s especially true on this route. I averaged 378 watts over the final 4 minutes (from the start of the climb to the finish line). If you want to turn in a good result you’ve got to be able to hold high wattage in the final 3-4 minutes of the race, plus sprint hard for the last 15-20 seconds.

Despite my result, I really enjoyed racing Lutece Express. The over-under route style suits me as a racer, plus it’s a really great workout. I’ll be racing here more… and I won’t misjudge the finish line next time. Hopefully.

Have you ever gone long and fallen short? Share your tale below! Also, let me know what you think of Lutece Express as a race route.

I actually raced against Poochiemoomoos in another race, with the same title and in the same course, just 3 days later – but then he was in cat A…

And yes, I experienced as well that the final sprint in this course feels very long!
As expected, the burrito worked differently this time. It was sometimes really hard to stay in the lead group when somebody else dropped a burrito. I even think Poochiemoomoos lost the group when I dropped one. Really sorry about that! 😉

The new burrito is going to make things interesting!

Ha! I remember that race. Was a tad quick for poochiemoomoos!

That was a great race. I was on poochie’s wheel in perfect position, but we had all gone a wee bit early. Let’s do it again someday.

I saw your name on Poochie’s wheel as well! Your USAC# stuck out to me.

I was there. Very good circuit. the climb has the potential to select. The ending was so tense that I’m not sure if I turned on the aero powerup 🤔

Soooo with exactly a half mile to go you thought a :25 second sprint between 500 and 700 watts would get you to the line? With .5 of a mile I would’ve mentally committed to at least a minute-long effort.

No… with .4 miles to go, I thought I had enough in my legs to jump and stay away. And about 20 seconds into that I realized I definitely did NOT. ﻿😂﻿

Hmmm.. I watched the video again and the counter literally ticked over to .5 of a mile in your video and your avatar starts sprinting ﻿😙﻿. Just busting your chops, btw. ﻿😁﻿ Keep the content coming. I thoroughly enjoy your “How the race was Won/ Lost” series . Thank you. ﻿😇﻿ 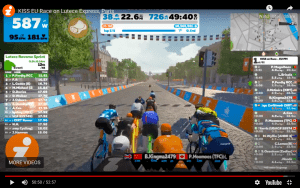 I love the line “First takeaway: know the route.” I entered that race last minute, and didn’t even realise it was the reverse circuit!
After getting dropped right at the start, my aim ended up being only to cling on with someone until the end and I just managed it – eventually finishing some 8m46s behind you! It’s cool to see a report from a race I was in – albeit it at the back. 🙂

Hey man: you beat everyone who was on their couch!

I spent a season or two just trying to see how long I could hang with the front of the B’s. I remember being so elated the first time I hung in until the finish!

Thanks for your article Eric; I was wondering why the sprint started so early, but now I know :D!

Because I make mistakes! ﻿😆﻿

Great story, Eric! As always, fun to read and full of useful insights.
Thank you for sharing.

I’ve never done a bike race on Zwift or real life before. I’m thinking about doing one, but I’m technically A class, which is scaring me away from trying one. Do you have any tips?

A million of them! All found in my posts.

Just jump in and race! You’ll probably get dropped quickly on your first race. No biggie. Keep racing and learning.