How the Race Was Lost: Critty Critty Bang Bang Mayhem 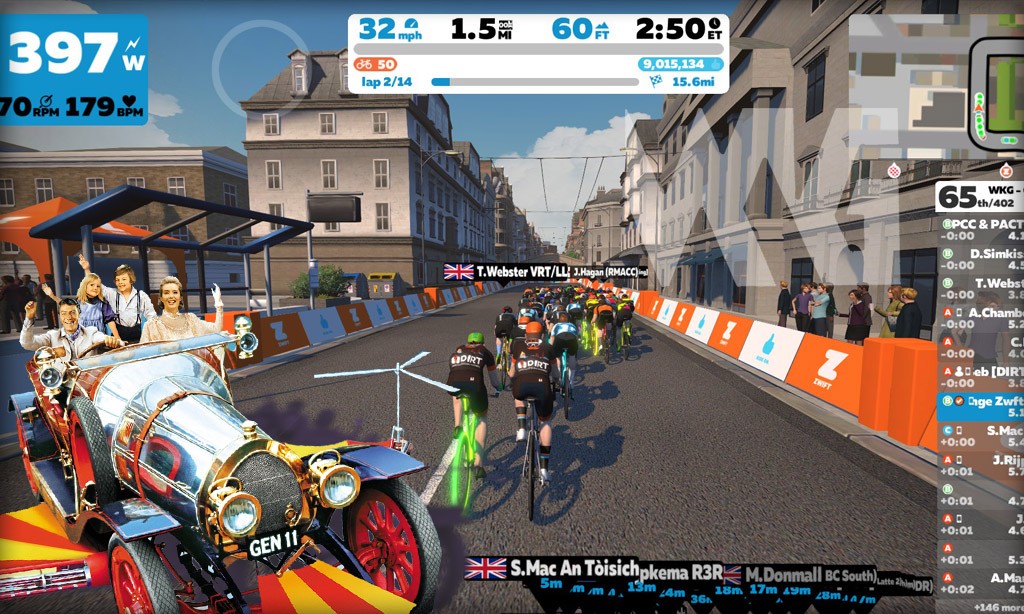 I’m a sucker for slick design. I’m also a sucker for wordplay. So when I first saw the branding behind the WKG events, I thought, “I should try those out. They look pro.” Then I saw the race named “Critty Critty Bang Bang” and I knew it was only a matter of time before I found myself in those start pens!

This was the day. And it was going to be a crazy race. There were hundreds of riders signed up for 14 laps of Downtown Dolphin, and all categories would be visible, which meant I’d be pushing to my max to try to hang with the stronger A’s as long as possible. Let the suffering begin. For PR’s! For glory!

This was a mid-morning event for me, which meant I was able to eat breakfast and get a decent warmup instead of rushing around a dark house at 5am. Refreshing!

As usual, I chewed two pieces of caffeine gum and rubbed some PR lotion into my legs. Then it was off to Tick Tock for a 30-minute warmup. But as I rode through Fuego Flats I started looking at the signup list for this event, and realized that there were a lot of riders signed up. Over 100 B’s, nearly 100 A’s, and that didn’t include those who would just show up last-minute without signing up.

“Damn the torpedoes! Full speed ahead!”

I decided to head to the start pens early, since riders are placed further and further back the later you join. I wanted to make sure I didn’t have to ride through any more riders than necessary at the start as I tried to make the initial selection.

Even though I jumped into the B pen with more 12 minutes to go, things were already crowded. That meant I would have to push even harder to make that first selection of A’s, B’s, and suspicious C’s and D’s. So be it. Let’s race!

The clock hit zero, and it was hammer time. I set a segment PR on my first lap, averaging 386 watts. I hung in for the second lap as well, but just barely… 349 watts for that. And as we hit the false flat after the lap banner, I couldn’t hold on any longer, and on the third lap, a group of ~80 rode away.

My screen showed me in 80th out of 402. But that was 402 riders total, from all categories. This is something that annoys me about mixed-category races – the fact that there’s no easy way to know where I’m at in relation to all the other B’s. I could see from the minimap that there were plenty of B’s in the group that just dropped me. But how many? 79? 10? I knew around 70 A’s had signed up… did that mean there were around 10 B’s up ahead?

The only ways to find this information out by yourself are:

But both of those solutions are far from ideal, as they force you to take focus off of what’s actually happening. Anyone want to play DS for all my races?

So there I was, on the 3rd lap of 14, with the leading group up ahead and some stragglers grouping up behind who would surely sweep me up soon. I eased my power, knowing I wasn’t going to bridge up to the front group or stay away from the larger group behind.

Where did I stand now? I knew we would be seeing some of the B’s in the front group get dropped and join our chase group – there was no way so many B’s could maintain that frenetic pace. But how many would we sweep up, and how many would remain out of reach?

On my 4th lap the group of A’s and B’s that had been swelling behind me came through, so I grabbed their wheels. This group seemed to be ~15-20 riders in size, but to be perfectly honest, it was already getting hard to tell who was where! With over 400 riders moving at different speeds around a small 1.2-mile circuit, there was a nearly constant stream of riders ahead and behind, and my only indication of standing was the overall placing number, which (again) didn’t tell me where I was actually ranked against the B’s.

I started paying attention to some of the stronger riders staying near the front of our group, so I could track them as we moved through packs of slower riders. I didn’t want to get gapped in all this mayhem and dropped from this chase group, especially since it was possible that a B podium winner or two might come from our group.

Happily, the pace was doable, although certainly not easy. I was getting useful powerups, conserving as much energy in the draft as possible, and watching as we slowly caught B riders getting dropped from the hard-charging A group. We were making progress, catching single riders and small groups as our group continued to swell in size. The front of our chase group went from ~85th to ~50th between laps 4 and 7, and my conviction grew that a B podium was within our grasp.

By the time we hit the final lap, our group had swelled to 30+ riders. The powerup gods had given me only bonus points for the past three laps, and they begrudgingly gifted me a feather for the final lap. Not what I was looking for, but I used it on the prime climb to save a little energy while I tried to stay within a few wheels of the front of our group.

A strong rider or two always seems to go hard from the top of the bricks, and this race was no different. I didn’t chase them, though, preferring to sit in the draft and let others catch those off the front. Soon enough we were down the twisty descent and it was time to shift, stand, and hammer out the final sprint. I gave it all I had, which admittedly wasn’t much after such a hard start and the longer race. I crossed the line in 47th overall, 10th in the B’s. Three B’s from my chase group had outsprinted me, but at least two of the B’s ahead were well over category limits, so I knew I had at least 8th place. What would ZwiftPower say? Final answer: 6th place.

I was pleased with my power numbers for this event, having set a new PB for 2020 in the ~3 to ~5 minute range. Like I said earlier, I joined this race because I knew that mixing it up with the A’s would push me extra hard. It worked!

I’m still not a fan of mixed-cat racing. But I will admit that it’s useful if you’re a rider like myself who is strong enough to hang with the front of a B-only race without being completely on the limit. If that’s you, and you want to improve, then you have a few race training options, as I see it:

I’ve been using all of these strategies lately in various races, and I know it’s making me a stronger racer.

I also dislike the lack of information regarding positioning in races, especially mixed-category ones. There’s a huge improvement opportunity for the platform there, in their time ahead/behind display, and in the elevation mini map.

Thanks for joining the race, Eric and for the brilliant write-up.

I’ve done this event 4 times now with the 1st 3 efforts ending with the same time within a few seconds and finishing in the bottom of the Bs. This week I decided to punch myself a little with a harder start and latching onto to faster groups as long as possible asthey came past. This worked quite well but did me in no mans land on a couple of occasions when I was dropped. Eric I like your tip of focusing on a stronger rider in your group when the fast boys come past. Hope to try this next… Read more »

The C’s getting double draft is an interesting plot twist. I noticed that when looking at the event description, but wondered if it was some sort of event setup bug, since I’ve never seen a race where only one category gets double draft. Hmmm…

Hope the Cs did get double draft or one of my excuses is gone. Tempted to ride as a C next week to see if it’s working although might get told of for sandbagging.

I’ve seen it before, but it could still be a bug. I liked your start pen banter to the new guy asking for tips. I was curious to see how our results would compare. I started at the back, was hard just to get to 120th! Probably could have done similar to you if starting nearer the front. I kept finding I’d shoot off the front of the group before the top of the climb and at the bottom of the rollers, even if I deliberately started near the back of the group (drafting maximisation) leading into either, wasted a… Read more »

Not knowing where you are in your category is a huge issue in many races on Zwift. This would be such a simple thing to address from the UI perspective. For instance, putting the name of the event at the top of the rider list is just about useless — you already know what event you’re in, and the space is so small that the event name never fits anyway. This space could be put to much better use by showing your place within your category (example image attached). 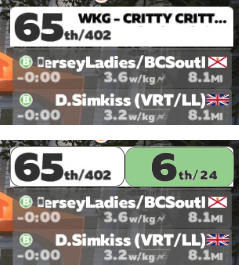 I instantly love this

Hi Eric, do you mind me asking your weight?
I’m doing B cat ‘crit races’ in Zwift, too, but struggling to get in the top five.

I’ve convinced myself that the field are Weight Doping so be good to know what you race at.

Sure, no problem. I weight myself almost daily, and I’m typically somewhere between 180-184#.

All things I very much identify with. I am in the unfortunate situation of being previously where you are in B but having lost weight I am stuck in A. Being able to place 6th in B is a whole lot more fun than 30th in A. So adding to your alternatives, I would list gaining weight and dropping a category as a way to improve 🙂

Hi Eric, which races go live on Zwiftpower? I was in one of the mixed cat Norsemen races just now and couldn’t seem to get a live update on Zwiftpower.

I love this fun race. Thanks for the great writing. As always.