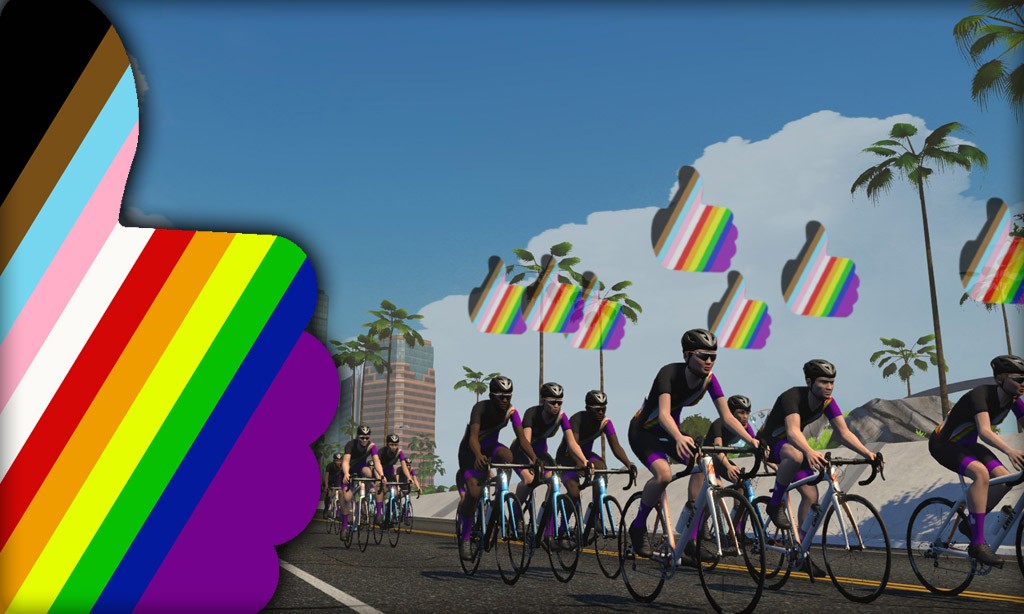 Zwift introduced the “Pride On” series of events in June 2019, rolling out the rainbow carpet for all. Weekly rides and runs were held each Tuesday hosted by members, friends, and allies of the LGBTQI+ community. Additional special events were also held, and a $20,000 donation was made to Athlete Ally.

This week Zwift announced Pride On 2020, an invitation for all Zwifters to celebrate our LGBTQI+ community during the month of June. It includes special events every Tuesday and Saturday, rainbow Pride Ons, more Athlete Ally support, and a kit to unlock! Here are all the details…

Special rides and runs will be held on Tuesdays and Saturdays for the month of June. These events aren’t meant to be competitive races – they are an inclusive place for the community to run and ride together. Zwift says:

Pride On is about fun, diversity, and community. Everyone is welcome in Watopia. Athletes of all stripes, orientations, and VO2 maxes congregate here to get active and push one another to become their best selves, regardless of how they identify.

We like to think we celebrate this every day. On Tuesdays and Saturdays during June, we’re acknowledging that our diversity is a strength that transcends watts/kilogram. And that strength deserves loads of fun rides and runs.

Zwift is inviting all event participants to get into the start pens early to meet fellow Zwifters and shower the group with event-specific Pride Ons. You can do this during the event as well, of course, although typing a message is a challenge on the treadmill!

Join LGBTQI+ Zwifters and community allies for a light group run workout. Held on the Chili Pepper route, these events are 5 kilometers long.

See the schedule of Pride events on Zwift.com >

About the Pride On Design

This year’s Pride On is a more colorful version of last year’s. Inspired by Daniel Quasar’s “Progress Flag”, Zwift added black and brown stripes to represent communities of color and also represents those living with AIDS, and those no longer living.

Additionally, the pink, blue, and white stripes are a nod to Monica Helms’s Transgender Pride flag.

The colorful Pride On will replace the standard Ride On in all of June’s Pride On events.

Zwift has already made a donation of $25,000 to Athlete Ally, and they’re inviting all Zwifters who are feeling the love to share a few dollars as well. You may donate directly to Athlete Ally from zwift.com/prideon2020.

Thanks again for this event and Zwift’s support of diversity in our world. It’s going to be a great series of events! As a lesbian and a member of this community this acceptance makes me so happy. Thank you Zwift!!! Ride and Pride On!

Pride is always important and this year, during Lockdown, it’s just as vital as ever. Some members of our community have had to isolate with people who refuse to accept them or/and outright abuse them and we are unlikely to be able to attend any physical Pride events to be able to stand tall together.

I love that Zwift do this and always smile when I see the phrase “Athletes of all stripes, orientations, and VO2 maxes”.

Thanks Zwift, thanks Eric and see you all there!

This may be too obvious for their graphics department, but I think the start/finish banners are natural spots to give a rainbow treatment.

If and when the pictures on this page are based on the actual game, the graphics department seems to agree. Pride on! https://zwift.com/events/series/ride-and-run-with-pride/

Love this… I enquired about getting the pride flag added instead of the normal country flag but didn’t get a response.

Looking forward to it!

Where can I buy this jersey to wear and show my support when I cycle outside?