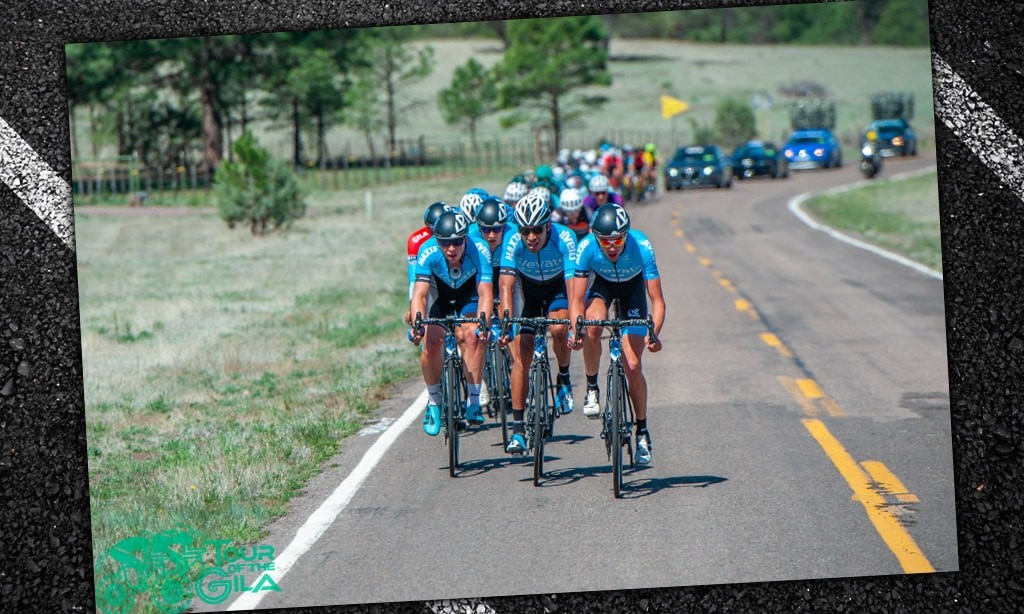 In 2016 I was a few months into my Neopro season with Jelly Belly p/b Maxxis and I was celebrating a team victory at one of the biggest stage races in the country. Our superstar climber Lachlan Morton had put on an emphatic display from the first stage and we defended the GC lead wire to wire. It was new territory for me and also for Jelly Belly. I had never had a reason to stand around the “winner’s circle” after a UCI stage race and it was the team’s first win at the high altitude New Mexican race in its 17-year history.  I really didn’t know what to do with myself. There was elation and excitement and I had an odd version of pride wash over me. I knew I had only been a bit player in the success and I hadn’t been a particularly strong one at that but we had won and that felt special.

Three years almost to the day and the feeling was different. I found James in the familiar leader’s red jersey and we exchanged a sweaty hug. This time the satisfaction rang true.

The Mesa. It is easily the most talked about 2km stretch of tarmac in the Tour of the Gila. It comes after a short, stinging opening climb in the finale of Stage 1 and leads quickly into the decisive 4km finishing climb. Legs and lungs are already burning as the road flattens, and the crosswinds sweeping through beat down on the shattered peloton. A newcomer might think it would come as a respite between climbing efforts but it is often the launch pad to win the stage and even the overall.

In 2016 my Jelly Belly teammate Taylor Shelden put on a master class in tactics and strength and dragged Lachlan clear on the Mesa. Taylor finished his massive pull and Lachlan danced away and opened a substantial lead in the GC. That’s how the Mesa is done.

In my next trip to Gila with Elevate-KHS last year, things weren’t so pretty. The tables were turned and the Rally team sailed away in the winds as I clawed across the gap to give James a chance on the climb. It wasn’t enough and it was clear there was a lot of work to do to bring the team up to the level of America’s most elite squads.

This time, after a big year of growth as a team, we took control of the race. Our big engine George Simpson put in a massive dig, eating up the barren Mesa and forcing everyone but James into the roadside gutter and out of the draft. James was P1 entering the climb and pulled off a stunning win. We had staked our claim on the Mesa just like so many winning teams of past years. It was time to defend.

Over my career, I have rarely performed well at high altitude races like the Tour of the Gila. I am usually good enough to do a job like in 2016 but rarely able to control the race in any way. I had a typical off day on stage 1 and was frustrated but I knew I needed to dig into my mental reserves and be stronger in the coming stages. I needed to be more than a bit player this time around–I needed to be a leader on the road.

In my time at Elevate I have tried to use what I learned in my time at Jelly Belly to be the best teammate I can be, and have become something of a road captain for the squad. It seems like I blinked my eyes and went from being a green (and fairly useless) Neopro to being one of the more experienced riders in the bunch. If we were going to control Gila and bring the red jersey home my guidance and my legs would be equally important.

In the Stage 2 road race and the Stage 4 crit, I drew on what I learned in 2016 to deploy our resources and try to recognize real threats and neutralize them. We also have the good fortune of having sprinter Eric Young on the team and he brought his experience in 3 previous Gila editions with the Optum, Rally team. It wasn’t easy but we ticked the boxes en route and brought it back to a sprint both days. The crit was a massive highlight as Eric and Alfredo capitalized on the team’s work and went 1-3 at the finish.

Barely 12 hours after the criterium celebrations wrapped up, dawn broke on possibly the most important stage in Elevate-KHS history. The past 4 stages had been almost flawless: 2 stage wins; Adam, George and James pulling a 2,3,4 in the time trial and a solid GC lead. The future promised over 4 hours of relentless climbing and descending and many chances for the jersey to slip away. The final Gila Monster stage with its 160km and 3000m of climbing always delivers on its name and any lead hangs in the balance until the final kilometers are done.

I’ve never been prouder of my team. The boys put on a clinic in every key section. We covered moves and set up a manageable breakaway. Eric and Alfredo sacrificed themselves in the 50km valley to keep the break close before the big climbs. George then set about defying gravity and ripped up the first 25-minute climb and later rode the front well into the iconic Monster climb itself. Uli rode 15km flat out between the climbs to keep the break in check. Finally, I was able to take over on the Monster’s upper slopes and scrap my way to the base of the final climb where James stepped up and played closer.

James showed maturity and strength and never let the race get away from him in those final moments. When I finally spun across the line he had already been Gila Champion for 6 minutes and 29 seconds.

I could really own it this time. This team has risen to new heights and I have been there the whole way. I feel lucky to be a part of it and satisfied that I can make a difference. Even better, there are plenty of races left to win this season and this team isn’t slowing down.