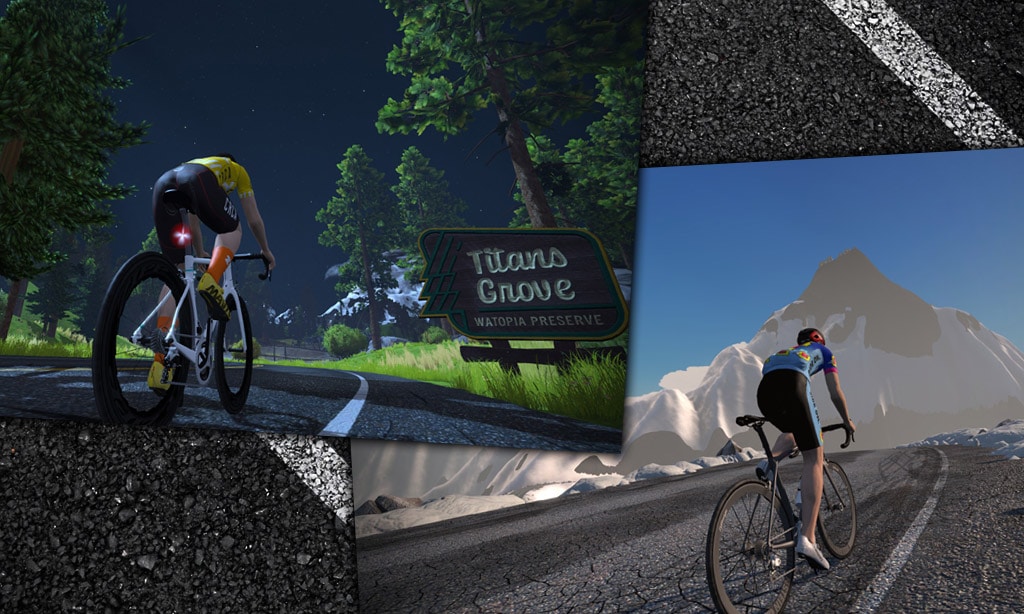 One of five routes rolled out with Zwift’s Titans Grove expansion, “Muir and the Mountain” takes you on a loop which includes the Titans Grove “Watopia Preserve” and the Epic KOM. Fittingly named for John Muir, “Father of National Parks”, this route’s in-game description is an adaptation of Muir’s famous quote: “The mountains are calling, and I must go.”

The route’s length and profile make it a nice choice for an hour-long session which includes a hard climbing effort.

Begin by turning left into Titans Grove (reverse direction) and enjoy your roller-coaster ride through the sequoia forest. Hit the reverse KOM section hard if you’d like, but keep in mind you’ll be hitting it again at the end of the ride… plus the much longer and steeper Epic KOM and radio tower climbs are coming up soon!

At the end of Titans Grove hang a right onto the Fuego Flats road, descending across the bridge and turning left onto the road to the Epic KOM. Climb up through this mountain pass, and when you hit the banner at the top remember: you’re not done yet! This route takes you up even higher as you turn left to take Watopia’s steepest climb: the radio tower road.

Once you reach the tower it’s time for a long descent. Enjoy the downhill–you’ve earned it! When you reach the windmills at the Ocean Boulevard intersection turn right, then another right after climbing out of the ocean tunnel to get back onto the road to Titans Grove. Keep riding all the way to the top of the Titans Grove reverse KOM–the route ends at the KOM line.

The route begins with a rolling lead-in punctuated by a short climb to the official start line. Then it’s a quick descent before attacking the Epic KOM and radio tower climbs.

The top of the radio tower climb is our halfway point distance-wise, but in terms of time you’re well past half because “it’s all downhill from here!”

I’m starting to lose my mind.. I’ve just hopped on this route via the Zwift menu and completed it according to the distance being 21.1 but the efforts in Strava show only 2 efforts on against the old route. So, can I conclude that the Spawn point should be ignored and that if I do go to the top of the Titans G reverse KOM that I will complete it?

Yes. The route BEGINS at the top of the Titans KOM, and ends there again. Long lead in!

@eric – is it possible to get the badge for this course? We’ve finished it twice and still no badge but haven’t found any tips/tricks to get it … any ideas?

I stopped early when I tried this, you have to remember the long leading and ride Till you get past the banner at the end

It would be nice if there some on-screen indicators about the chosen route.

I screwed up and quit Muir & the Mountain less than 0.1 mile early yesterday and was not awarded the badge. I had forgotten the distance of the ride thinking it as less than 20 miles total, but I had exceeded the elevation gain. Anyway to complete that last 0.1 mile and get credit for the badge?

Save & Accept
6
0
Would love your thoughts, please comment.x
()
x
| Reply
Comment Author Info
You are going to send email to