Martin Lavrič of Slovenia Crowned Winner of the 2018 Zwift Academy 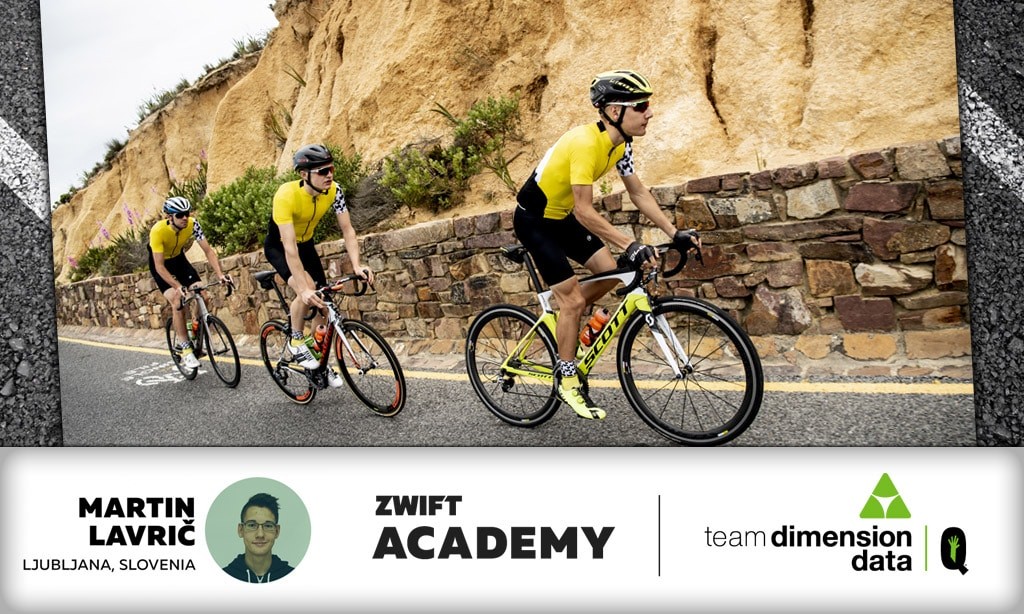 And then there was one.

Team Dimension Data for Qhubeka has announced their choice of Martin Lavrič as the Zwift Academy finalist who will receive a 1-year pro contract for their U23 squad. Martin (who hails from Slovenia) was up against Alex West (New Zealand) and Ollie Peckover (Great Britain) in competition for the contract, and the three young men trained together last week in Cape Town, South Africa under the watchful eye of team management to decide who would ride with the team for 2019.

Journey To a Contract

All three finalists had to complete a week of structured workouts, Zwift races and road drills with Dimension Data stars including Mark Cavendish, Bernie Eisel and Ben King. Each exercise was designed to make sure the winner has what it takes to make it as a professional cyclist. But this week was only the end of a much longer process.

In its second year, Zwift’s groundbreaking talent ID program saw a record 30,000 male riders enter for 2018 (3x the number of riders who entered in 2017!) While most joined as a means to improve fitness, U23 athletes seized the opportunity to compete for a professional contract with Team Dimension Data for Qhubeka.

Martin joined hoping for a semi-finalist spot, but came away with much more:

“I entered Zwift Academy with an eye on a semi-final place, as I wanted to win an Elite smart trainer, but I walked away with a pro contract!”

To qualify for the semi-finals riders had to complete a structured program of group rides, races, and workouts in Zwift over an eight week period. The top 10 Academy graduates were then selected for the next round of tests by Zwift’s panel of expert coaches. Once those tests were completed the coaching panel worked to determine who would advance to the finals with a trip to a week-long team camp.

This year’s Men’s Academy was even more competitive than last year’s, and it showed as the coaching panel worked to narrow the field to semi-finalists then finalists. Elliot Lipski, Coach to Team Dimension Data for Qhubeka says:

“We’ve seen some really strong riders come through the Academy again this year. In fact, I think the pool of talent goes even deeper this year. It’s not just a numbers game, it’s also important to see how the riders react to different scenarios out on the road, how they communicate and how they fit in with the team.”

You may know Dimension Data’s Edvald Boasson Hagen from watching World Tour racing, but did you realize he’s also a level 25 Zwifter? He says,

“Quite of few of us here at Dimension Data are big fans of Zwift, so the Academy is something great to be a part of.”

Dimension Data’s U23 team is based in Tuscany, and Edvald says it should work out well for Martin:

“A few of the senior riders live in Tuscany, where the U23 team are based and I’m sure they’ll keep a watchful eye on Martin.”

It looks like Martin is in good hands with Dimension Data. Coach Lipski says:

“… we’re really confident in Martin. He showed real instinct out on the road, and the other riders took to him well. He’s got a great program with us at Team Dimension Data for Qhubeka and a direct route into the World Tour if he proves himself. Now is just the beginning.”

Qhubeka’s mission is to move people forward with bicycles. “Qhubeka” is an Nguni word that means “to progress,” and, with a bicycle, a person can travel faster, and move further, and carry more, whether it’s to a job, a school, a clinic, or a place of clean water and abundant food. The bicycles we provide also have a crucial role in initial emergency response for disaster relief. Based in South Africa, but operating across the entire African continent, children and adults in rural communities earn our Buffalo Bikes through our Learn-To-Earn and Work-To-Earn programs, moving them forward towards a more secure and richer life.

About Team Dimension Data for Qhubeka

Team Dimension Data for Qhubeka is Africa’s first ever UCI World Tour team, starting its first season in 2016. After three successful years in the Pro Continental ranks, the team has enjoyed considerable success as a World Tour team, competing at the highest levels of the sport. Team Dimension Data for Qhubeka continues to operate a U23 Continental team as well, nurturing junior talent and developing the World Tour team’s future athletes. The Qhubeka project remains at the core of our setup and the very reason why our team exists. Team Dimension Data creates a platform for awareness about Qhubeka and garners international support for the project, so that Qhubeka may continue to mobilize the African people, giving the team a sense of purpose beyond competition. Team Dimension Data wholeheartedly believes in the #BicyclesChangeLives campaign and that it will remain a driving force behind our success.