Zwifting is a very fulfilling and entertaining experience 99% of the time. However, when you have a low moment, it is a reaaaaaaally low one. One of those times when you feel so miserable that you remember it forever.

Here is the list, in no particular order, of my lowest moments while Zwifting.

First race on Zwift, a week after I joined. I am a D rider, signed up for a 30km race including Titans Grove. I am immediately dropped and get to race the equivalent of a 30km individual TT. All by myself. I cross the finish line 102nd out of 105 (last 3 certainly abandoned) and 8 minutes after the small pack of 5 before me. Two choices: I cancel my Zwift subscription to avoid further humiliation, or I study.

The very same day I discovered Zwift Insider and read all the existing material related to race tactics etc. I  started my PhD in Zwiftinsiderism a few weeks later.

During summer, it is not uncommon for Madrid to be 40 degrees celsius more. Therefore you have two alternatives:

Today it’s Zwift time. It’s the day you have your VO2 workout, which involves 2x 20-minute threshold efforts. So the workout is easier to perform indoors.

5 minutes into the first threshold interval, the first drops of sweat appear in my skull (I am awfully bald), threatening to roll in my face and ultimately soaking the rockerplate.

Variant Number 1: Without watching, I mechanically extend my arm to grab the towel I always place in the stand to my left and… my hand explores and moves but… nothing. I forgot to place the towel in the basket!!! Still one hour to go into the workout, and there is no way I will pause the workout! It goes against my most basic instinct but also against my religion!

Variant Number 2: This time the bottle of isotonic drink is missing. The difference is that without water I may die. So there is more pressure to pause the workout. Nevertheless, I prefer dying standing for my values and beliefs than living compromising them!

Variant Number 3: The fan decides to die in the middle of the workout. It happened, for real. That is the reason I have 4 now. Not joking.

#3: Update Before a Race

ZRL race day. You arrive just in time because you crossed your boss leaving the office and he had to give you this major update on the most important project in the world nobody gives a shit about.

ZRL race 4 season 2. 25 minutes before the start of the race, I log in to Zwift to be able to join the pen and… no button to join the event. No matter what I do, restarting, resetting, relogging: NO JOIN THE EVENT BUTTON!!! In normal circumstances, in an average Marvel movie, Iron Man would come to rescue me and build a Join Event button out of the blue. But nothing. There is no Avenger hero available in such a dramatic and serious situation. They are all up to save the world, but the join event button is missing and no one shows up to help.

This one not many of you have experienced I hope. Imagine you open your email and discover you have been shadowbanned as a result of a misunderstanding with Zwift HQ. That is what happened to me on February 24th with the #freeLuciano aka Lucianogate saga. A hashtag was created on my name, and many influencers and cycling magazines described me as a cross between Robin Hood and Judas following the disclosure of an exploit in the game.

I am none of them. If anything I am the closest thing to Benny Hill in this story.  I felt alone and extremely supported at the same time. It was a schizophrenic low and a high moment. Being a ghost still haunts my nightmares from time to time. By the way, what happened to the bug bounty program? 🤐

6 weeks into FTP Builder you feel you are going to be the king of the world. Nothing less than 5 W/kg is acceptable. You have invested around 55 hours of your time to methodically complete all the workouts of the training plan. It’s scientific, your FTP is going to skyrocket.

But no. Because when the ramp test finishes you have just decreased your FTP by 5 watts.

When trying to pair Amanda (my trainer) or in the middle of a race when I get the “no signal” message, I take it personally. It is more or less like denying the existence of a member of my family. Nothing is more infuriating than struggling for 10 minutes resetting and restarting all the devices to get them recognized by Scotty.

I slingshot on top of the Titans Grove climb to fill the gap with the small group just two seconds before me and BAM!!!!! There is the sound of a small explosion under my feet. I immediately feel something is wrong and the left side of my rocker plate is almost touching the ground. One of the inflatable suspension balls has popped, and I become like the Tower of Pisa, inclining to one side and about to fall off my bike.

True story. November 15th, 2022, and the reason why I started this post in the first place.

ZRL TTT. Nightmarish start. 4km into the race we are only 4 left because two riders had technical issues. Having to pull more than a minute at 410w every 2 minutes and 30 seconds destroyed me. I don’t even know how we managed to reach the end in one piece. Everything hurts. Even the hair I don’t have hurts. Needless to say I am not psychologically available for any jokes. But Zwift, once more, is going to stab me big time as the following pops onto my screen:

Really Zwift? What’s the need to beat my pride that way when I am the weakest?

Where is the “Go to hell, I feel like crap, I will never do this again” option? 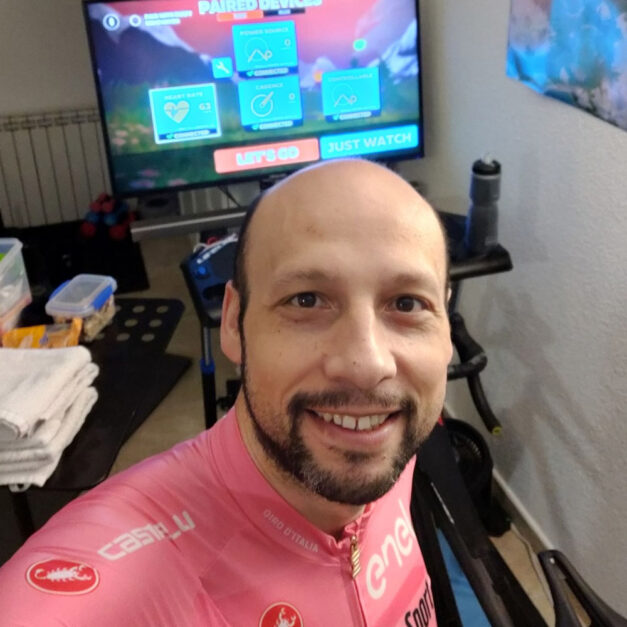 I’m still conflicted by zwift over #freeluciano. Love zwift, hate what happened to you.

so funny reading this as I’ve experienced them all. I no longer feel alone 🙂

We are a community for the good and the bad 😂

#3 crossing your boss had me laughing so hard! Haha exactly how it works. When there is a scheduled race the universe throws everything at you, if it was a late join event the zwift universe works perfect so you arrive early every time.

Do we have the same boss?

Re: #9, I need to hear the end of the story. Please tell me you either a) finished the race in Pisa-Position, or b) fell over trying.

I obviously finished the race in Pisa position. I have some dignity!!! I don’t believe you can fall. You feel like you are going to fall but it does not happen.

I sent a formal complaint to customer support for the emotional distress this caused me !!! 😂

Even worse Story involving that pop-up: I’m riding a ZRL one cat up (A while being a strong B rider) and was desperately fighting to keep up with a group up Titan’s Grove. Then: sweat drops on my mobile’s screen, selecting the “end ride” button in my companion app (of course!). In wild panic I use my towel to dry the screen to be able to press “Noooooo!” and resume racing, all while still pedalling frantically to keep up with the group I can’t see right now…..yes, I made it back…!….Boom!! Rate your ride pop-up appears although I’M STILL RACING!!!… Read more »

MOUHAHAHAHAHAAH! Laptop AND mobile would have been non identified flying objects if it was me! HAHAHAHAHAH! Love it! Sometimes reality is way more creative than fiction

Yeah, I was kind of close to throwing things…but I still had a finishing position to worry about😅
That was a tough one, but now it’s a good story, at least!

Who tells you I am not? 🙂 But nope. it requires way more capacity of structure and quality than I have. I am a sniper kind of like, I can write funnily about an idea, a whole book is a different thing… in English… In French and Spanish it’s another story.

So good—Perhaps your best work Luciano, though that bar is high! My only complaint is that 2×20 is not a vo2max workout. 🙂

You are totally right. I had a full list of workouts in there originally and forgot to correct when I deleted them 🤦. Thank God the community is here to save my dignity!

i love your articles.

Thanks! I promise to continue being a pain !

You can make money out of this, a lottery where people would bet if you are C or B next time 😂

I set up a Zwift paincave for my best friend. Turns out, I am a morron.
My friends first race, D cat, he gave it everything in the sprint, me cheering – and yes – bike came off the smart trainer.
He succesfully completed the first ever Zwift real life crash I have ever heard about. He went to the floor, I went to the floor, laughing.
Makes me chuckle just writing this. So sorry Tobias

Ok..you win… I promise I will never complain about my lows again 😂