Lucianotes: How to Destroy Your Bike (a Tutorial)

The day I tried to change the chain of the bike on my smart trainer was certainly one of the most memorable failures in the history of mankind: an absolute demonstration that not all human beings are living proof of Darwin’s evolution theory.

Furthermore, if the maintenance of bike mechanicals depended exclusively on my skills, bikes would become an endangered species in less than three years.

If an alien watched the three-hour video from the surveillance cam of my pain cave that day, he would be confused as he watched me fight against every single part of the bike. If he assumed that all humans were as dumb as the guy on the video, he would be torn between the attractiveness of a very easy invasion of planet Earth, and the idea that our uselessness for any kind of productive work would make even an easy invasion not worth the effort.

Everything started when I began to clean my entire Zwift setup. It happens on the last weekend of every month. The desk, the mat, the smart trainer itself, the pedals, the drivetrain, etc. Removed and clean the cassettes, clean derailleurs, etc. Full spa treatment for Amanda.

As usual, I took the opportunity to go through the checklist. One of the items is to verify the space between the cogs of the chain. This time it was clear my chain was too stretched, and I needed to change it.

I spent a good 20 minutes watching different video tutorials. It did not seem that complicated.

(Wait for it… I can see that you think you are anticipating the end, but, believe me, if this is eventually the case you have an imagination far more advanced than any Hollywood screenwriter.)

Next thing I remember, three hours had passed and I had dozens of small bike parts and smart trainer components spread all over the pain cave. My heart rate racing faster than it would in the last KM of a Bologna TT.

At this point it was way too late to ask for help, and the only rational solution would have been to put everything in several bags and run to my bike shop. That’s the home of my friendly local mechanic who already knows I was born with two useless left hand, after I tried to convince him to put tubes in the tubeless tires of my gravel bike.

But instead of admitting my defeat, out of pride I magically persuaded myself that if I just took a break, a fresh perspective would let me solve things myself.

Exactly two hours later I came back to my project totally convinced I would beat the problem while the UCI World Championships live-streamed in the background (Alaphilippe rules!)

I think that what happened in that room during the next 75 minutes may be the greatest act of cruelty towards any bike in the world.

Each time I was trying to reassemble all the parts into one homogenous body the “thing”  was looking more and more like a Picasso painting from the later years of his cubist period.

Any resemblance to a bike in real life would have been pure coincidence.

After many episodes where I ended up banging my head against the wall, and several crises of anxiety, I managed to put things in good enough shape so I could present my “almost bike” to my beloved mechanic without totally losing every shred of dignity.

For those remembering how the thing started, the worst part is that the old chain was still in place, meaning the initial objective of my overall intervention was still pending a solution.

For the good Samaritans thinking “Well, s**t happens, everybody has a bad day”, let me be crystal clear: as a bike mechanic, I did not have a bad day, I am having a bad life. I am sure that if I reincarnated in a new body in two centuries I would still be a crappy bike mechanic.

This statement is the result of a series of events leaving no doubt about it. In fact, I could have started today’s article with the day I broke the caliper of my rear disc brake by forcing the screw in the wrong direction and having all the brake liquid explode in my hands. Or the day I thought I could fine-tune the setup of my front derailleur and finished having to change all of my shifting cables…

First, I can confirm that there is zero, absolutely zero, correlation between your Zwift level (42 in my case) and your IRL mechanic level (-17 in my case).

Second and more important. I can confirm that there is zero, absolutely zero correlation between the effort you put in trying to get better at bike mechanics, and the actual result.

Whoever believes talent in bike mechanics is not a natural gift should write his doctoral dissertation on the following question: “Are we all equally skilled bike mechanics?” Please make sure in your sample research you include one or two guys who were born with two useless left hands like me. You will see there is nothing you can do.

So, final question: who has a problem with her/his bike and wants me to take a look at it?

Outstanding article. As someone who struggles to change a light bulb, I totally feel you.

Dot ask me to change a light bulb either. Unless you want a justification to buy a new house ﻿😆﻿

I hope when you undertake your bike maintenance on a monthly basis you are using Muc-Off products, my friend 😉 Great article and totally feel your pain, that was me in January when fixing my broken gear cable that I broke during the Gran Fondo, which turned into a 2 day fix! Since then, I been studying the complex art of Bike Mechanics!

I love Muc-Off and yes my bike mechanic uses Muc-Off products. Now the one that I prefer is their chamois cream!!!! I am grateful each ride!

Please please please explain to me the joke. I am sure it is great. I have tried to search and it refers to a Welsh Soccer Player… 🤣

As someone who needed a freaking hour to screw pedals on my bike because i was a) too stupid to understand the concept of crank length and left me confused and angry b) normal people are born with two hands but at that day i discovered that i don’t have any and c) whoever wrote the manual for the Neo bike took a long look at Ikea manuals and thought to himself “how can i make this but worse” – i feel you. I’m deeply terrified to ever have to fix anything.

The other day my wife finished a painting. I asked her if she wanted me to put it in the wall… She did not answer and changed the conversation topic…

Reminded me of the ZRL race in New York where it ended at the top of the KOM (forward, I think). I was blissfully scooping up dropped riders at the back of the race (yes, I am a terrible racer), and tried to catch one at the end of the race. Figured I could ram it into the small ring and fly by. Dropped the chain past the small ring and tried to force it back up. By the time I was done, it was looped around the bottom bracket twice. But, there were still finishing points to be had,… Read more »

I will definitely think about the mechanic being with me during ZRL races!

Can’t even think of any bike or trainer parts that would require disassembly when changing the chain. On second thought, I can’t think of a single part even the worst mechanic would consider removing for the task. Come on, you made this one up!

Obviously, I did not have thousands of parts all over the place, only a few which made the bike unfit for purpose. That is the way to magnify it so it is fun to read and totally represents the feeling of being useless I had at the time, and it was not the first time. However, you are underestimating the ability of us, mechanically challenged, into making something easy for anyone something complicated. Since we made an autopsy with the bike mechanic (yes, I really ended up going to the bike mechanic with he entire bike and smart trainer), let me… Read more »

This had me LOL—Even better than the original article!!

That was the story I hoped to tease out of you 😜
Thanks for sharing. Next time you change a chain, just put a nail through one end of the old and the new chain, hang them side by side and break the new chain at the right length. If there’s no nail available, remove one that is on use somewhere else but probably doesn’t really need to be there, preferably when your partner isn’t looking. You can always replace it later…..

Next time I need to change a chain I call you 🤣

…or we can have a chat about wheelbuilding…

And, by the way, telling this story helped me figuring out my condition is not that bad, as some people shared with me anecdotes at least as ridiculous as mine: a friend of mine acquired Vector 3 pedals and did not know right pedal and left pedal had opposite ways of being screwed, ended up forcing one of the screws of the right pedal (image attached). Now he has a one sided powermeter instead of a double sided… another one did not know wheels for rim brakes and disc brakes were different and bought online the wrong ones another one… Read more » 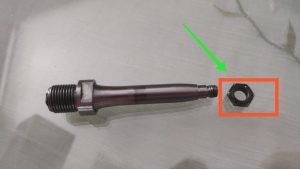 That is what happens when you mix a french with an argentinian.

everybody has a superpower, and yours is making others laugh! also we all have the opposite and you my friend have found that one too!

So, if It understand correctly, you laugh out of my miseries, right? Not sure how I have to take it 🤣. Thank you very much Dave. It is very entertaining and cathartic to write the stories.

Gr8 article. I share your frustrations on bike maintanance and how a seemingly simple task could ruin your Saturday afternoon. Even if my Zwift level (20) is really at par with my bike mechanic skills, the problem lies with something acquired over the years. A belly. Although, a bike repair stand makes everything easier, the sweat comes when some small part or screw falls to the ground. Finding it, holding your breath, bending over to pick it up, and getting up feels like a hill sprint. Actually, they need to categorize these exercise — (pulling yourself up from the poolside… Read more »