A huge congratulations and #RideOn to British Ultracyclist Jasmijn Muller, who has pushed the Zwift distance record even further.

She began her attempt at 3pm GMT on Saturday, February 18 and finished 62 hours later after beating the record of 1626km set by Chris “Hoppo” Hopkinson last year. (Hoppo completed that distance in 72 hours and 36 minutes.) 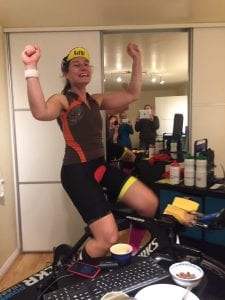 At one point Hoppo even joined Jasmijn (virtually) to lend his support, as did hundreds of other Zwifters.