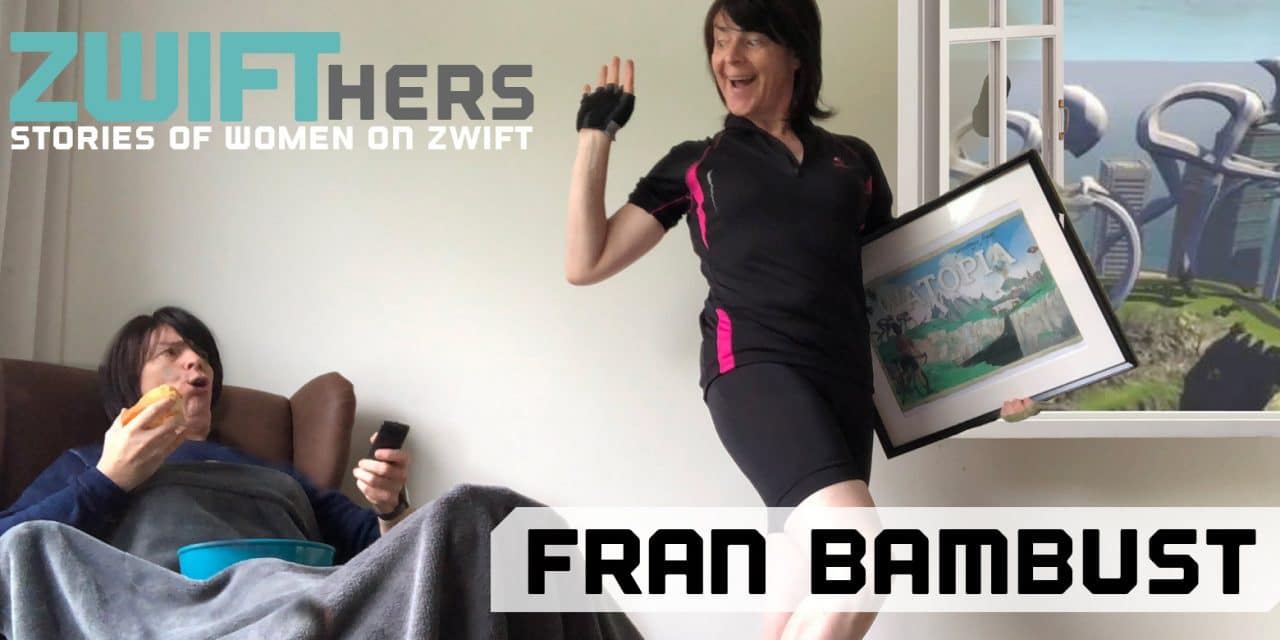 I was minding my own business recently when I got a private message from Theia Friestedt of Endurance Lab fame. Basically, she told me I HAVE to see the art of one of the gals doing the Zwift Academy. I checked it out and knew the Zwift community needed to meet this gal as well. I set up an e-mail interview, but her quirkiness and incredible writing were so endearing that I chose instead to have her tell the story herself. Please meet Fran Bambust.

(Fran says this about the image above: “I soon got the feeling that my Zwifting experience could be a life changer… Out with the old (couch potato Fran), in with the new (Watopian Fran)…” – The cake in couch potato’s hands references our constant mentioning of cake during group rides and in the ZA Facebook group.) Scroll down for more of Fran’s incredible art.

I am considering moving to Watopia, maybe rent an apartment in the Italian Village or in the Spruce Goose if it’s for hire. I could work from there, logging into the real world from time to time if I really have to.

I live in Breda, the Netherlands, now with my two little robots, R2D2 and BB-8. I’m a Belgian by birth and still work a lot for Belgian customers. I started out as a copywriter in the early nineties and since then I’ve made television programs, wrote children’s books, developed musea, created a behavior change model that is used by the Belgian government, worked in a factory, advised that government and several cities on all sorts of topics, been a spokeswoman for LGBT rights, chief editor for magazines… and I’m always surrounded by computer screens. I love computer screens.

Yet I knew I had to get this body moving. It tends to start looking like a hump of meat with bones sticking out, and since I do need to go amongst the living from time to time, I do have to take care of it at least a little. I am not a sportive woman. Ever since I was little I dreaded sports. I was clumsy, short of breath, too heavy and I have problems with depth perception. Don’t throw the ball at me. The only movement I did enjoy, was sitting on a bike. Not that I could ride very fast. I couldn’t. I can’t. But I thought it was fun.

When I turned 35 I bought myself a racing bicycle. A Kuota Kharma. I have no idea whatsoever if that’s a fine bike or a piece of rubbish. I liked the color. So I started riding. And I kept on riding. I rode the Tour of Flanders ten times – the abbreviated version, mind you, and I took my time. I even started climbing. Up the Alps, up the Tourmalet. And I went down as well. Having no depth perception is a bummer on a bike as well. I would advise against it. You get the urge to bump into things, into people and steer off cliffs. After my last earthward plummet, I decided to stop biking all together.  I seem to have at least a minimal sense of self-preservation.

I had pondered selling my faithful Kharma when I read about Zwift. A virtual world? Where you can bike without falling? Where no one laughs at you because you’re slow or because you look weird? Sounds like my kind of place. I got there last year, but it didn’t stick. I was overwhelmed, I supposed. I tried again this year during the Tour de France, and obliged myself to ride whenever the pros were entering the last 40 km. And that’s when I got the taste of it. I started liking the fun and the pain. And I didn’t fall anymore. Yes, I know how to fall with my Tacx. At first, every time I descended a Zwifty hill or another rider came too close, I panicked and jerked myself to the ground. But by the end of the Tour I got used to the whole experience… and I loved it. I loved the scenery, the routes, the sweat, the heightened heartbeat… and the lowered body weight. But what would I do now the Tour had crowned the Welshman?

Zwift Academy to the rescue! I jumped from joy when I read the announcement. There was such a thing as an Academy! With challenges! Workouts! Group rides! Even races! I could be a genuine racer! Yeehaw! I started picturing myself as Marianne Vos, Annemiek Van Vleuten and Anna van der Breggen all rolled into one, weight and age included.

And it was fun. It hurt like hell, but it was bliss. I loved it. And the weirdest part was all the people who started saying: Ride On. I am not a sentimental girl, but I do admit that I got emotional. A professional rider like Leah Thorvilson took her time to answer our questions and gave us tips and cheered us on. This was a new world and I loved it. And I grew thinner. I haven’t been this thin in ages.

And so, I started sharing my joy, my amazement and the wonder I experienced in the only way I know: with silly words and drawings. In that way I wanted to give something back to all the people who have given so much to me, adding on the experience. For slow people like me, it isn’t about the first prize or the fastest lap, it’s about the wonder. Watopia is a wonderful place and a wonderful experience where even silly me can feel like a superhero on wheels. Watopia has been my holiday destination, a place where I have spent several dreams. I talk about it to whomever I meet. I have even incorporated it into a speech I need to give to Flemish government officials. It is changing me. I am becoming a better person; I even start thinking that I might get better at biking as I get fitter. I will try out the other workouts and plans… and then I’ll move in to Watopia. My bags are packed. 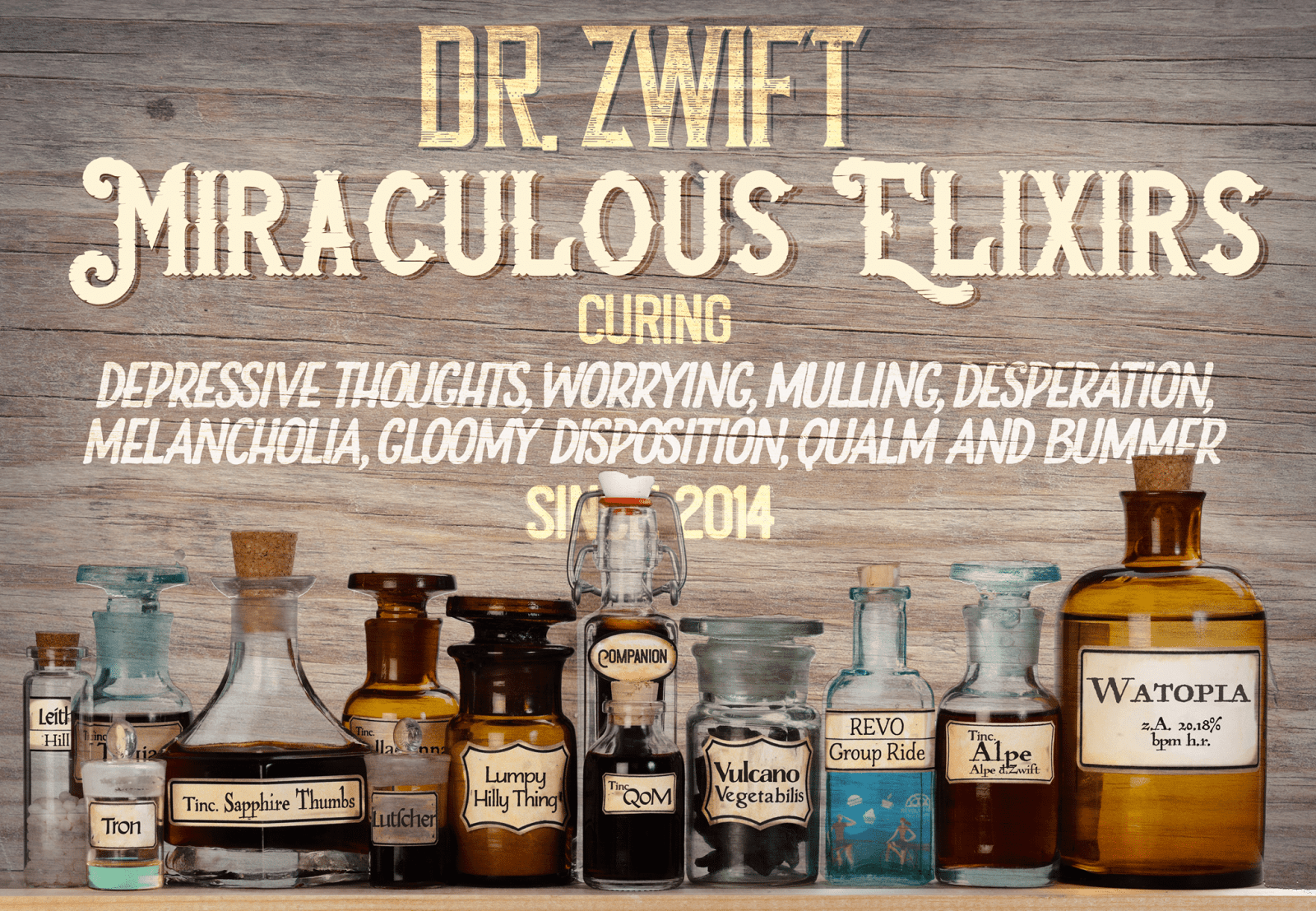 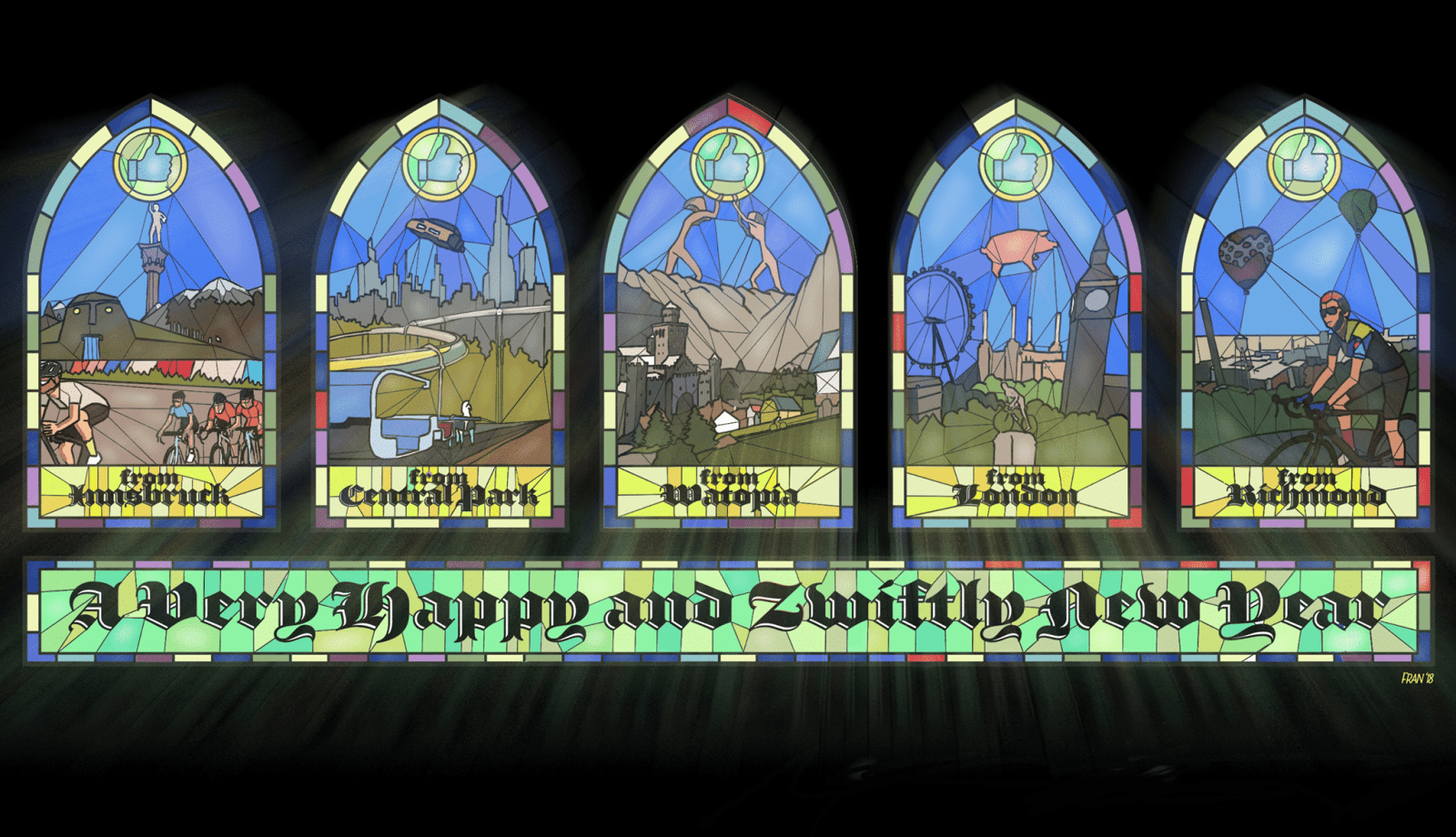 I came up with this one after I read the Zwift question on FB about what we will remember about ZA. 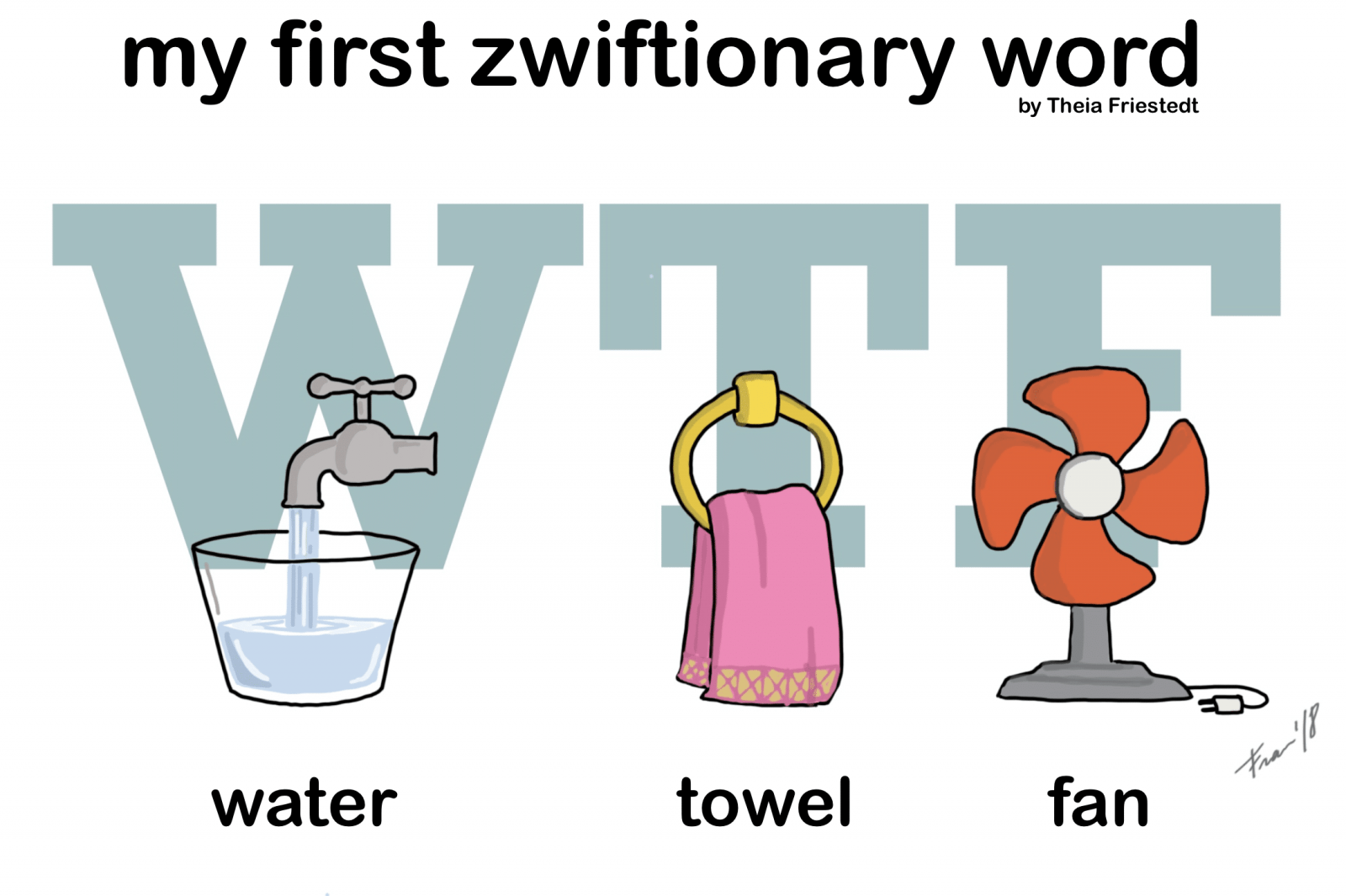 Zwift doesn’t only do miracles for my body, it also broadens my vocabulary. ERG, FTP, ANT+, Kickr, Tacx… and thanks to Theia Friestedt, who came up with the acronym, I finally know what WTF means! 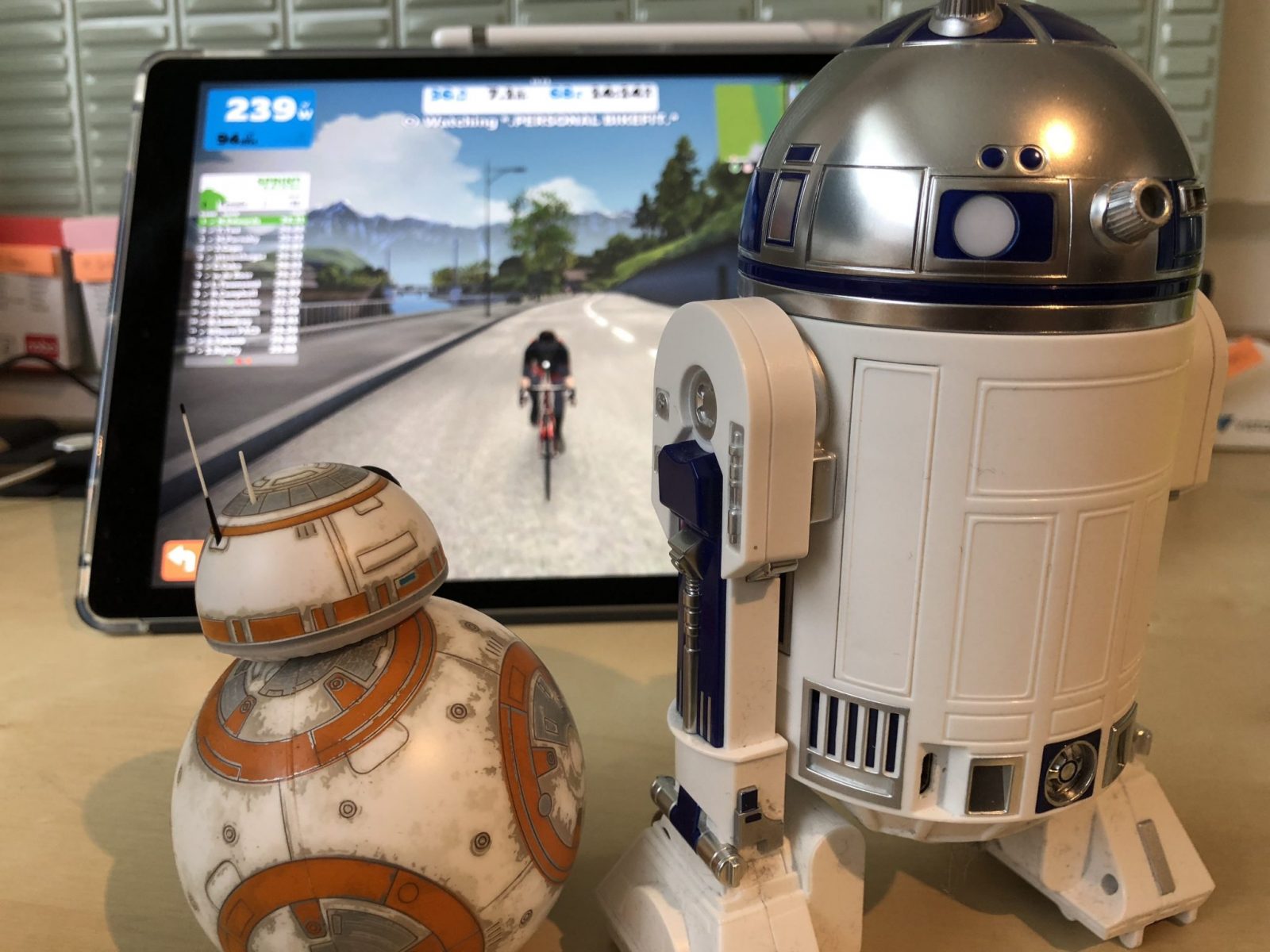 I do have two tiny robots who keep me noisy company. Here’s a photo of them watching Zwift. 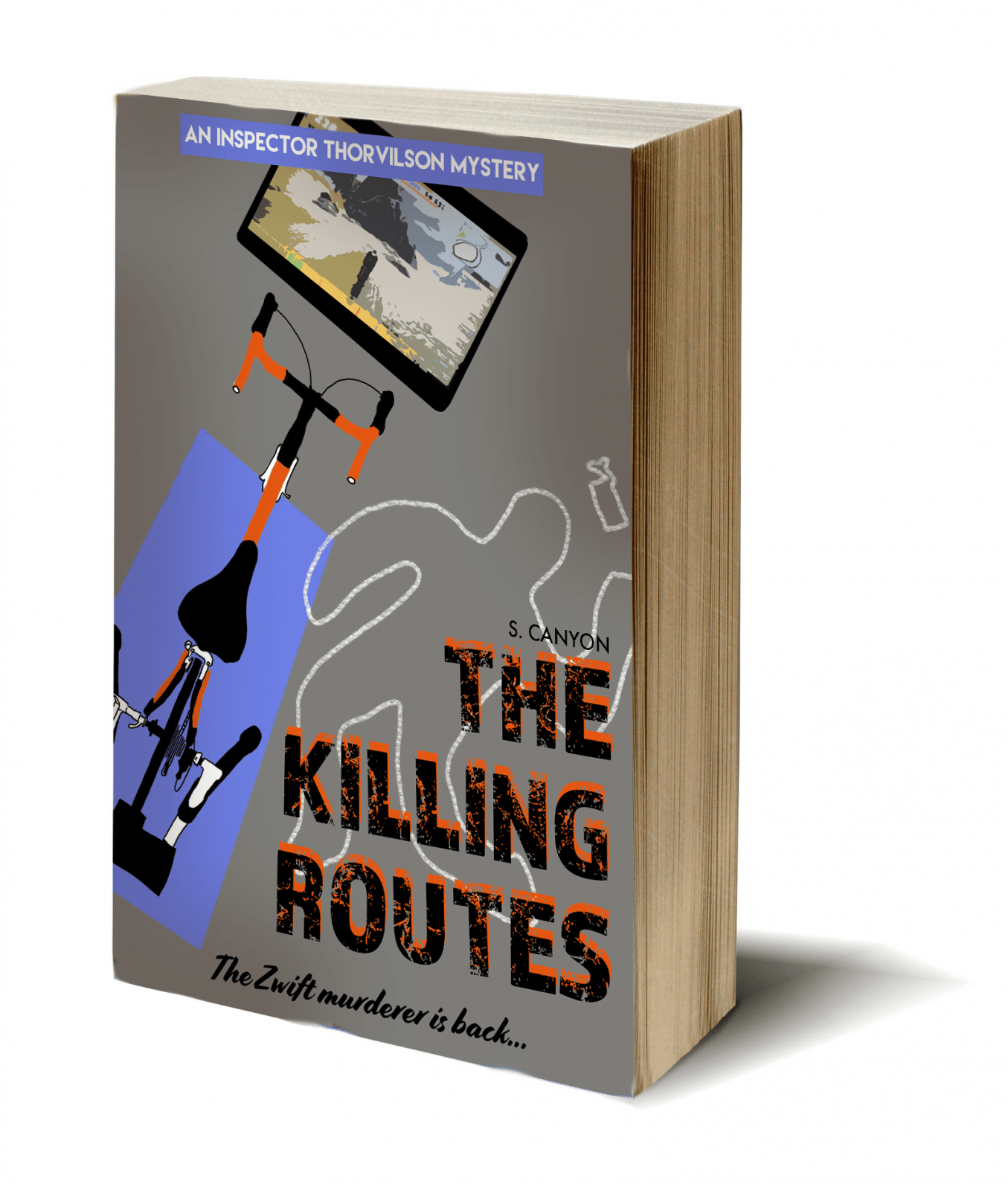 Crawling up the Lutscher, dying in the saddle, I could only think of one thing: “The Zwift Murderer is back at it, killing all these novice riders… What fiendish routes is she using to slaughter them now? Will inspector Thorvilson be able to stop the slayer?” – I picked Leah as the inspector because she is always helping us when people have problems connecting or when they are at a loss. I thought of this one riding up the Lutscher for the first time. I was so happy that I had survived all the other climbs on Zwift and now the team had added a new killer to the mix. 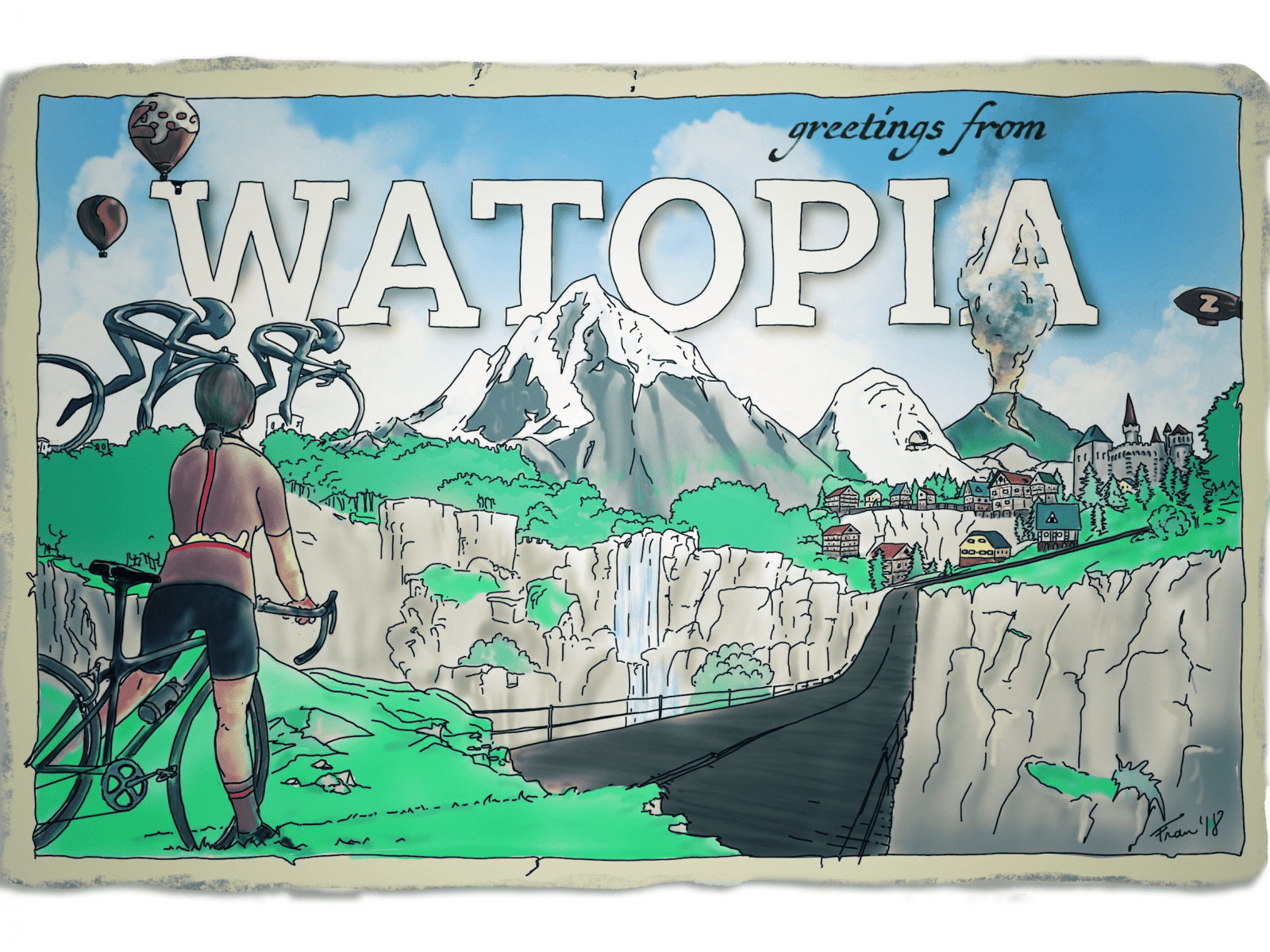 “People kept asking me where I’ve spent my holidays. So I sent a postcard.” There are some fun details in them, like the kitty bottle on the bike. One of the ZA participants shared a picture on FB of that bottle. 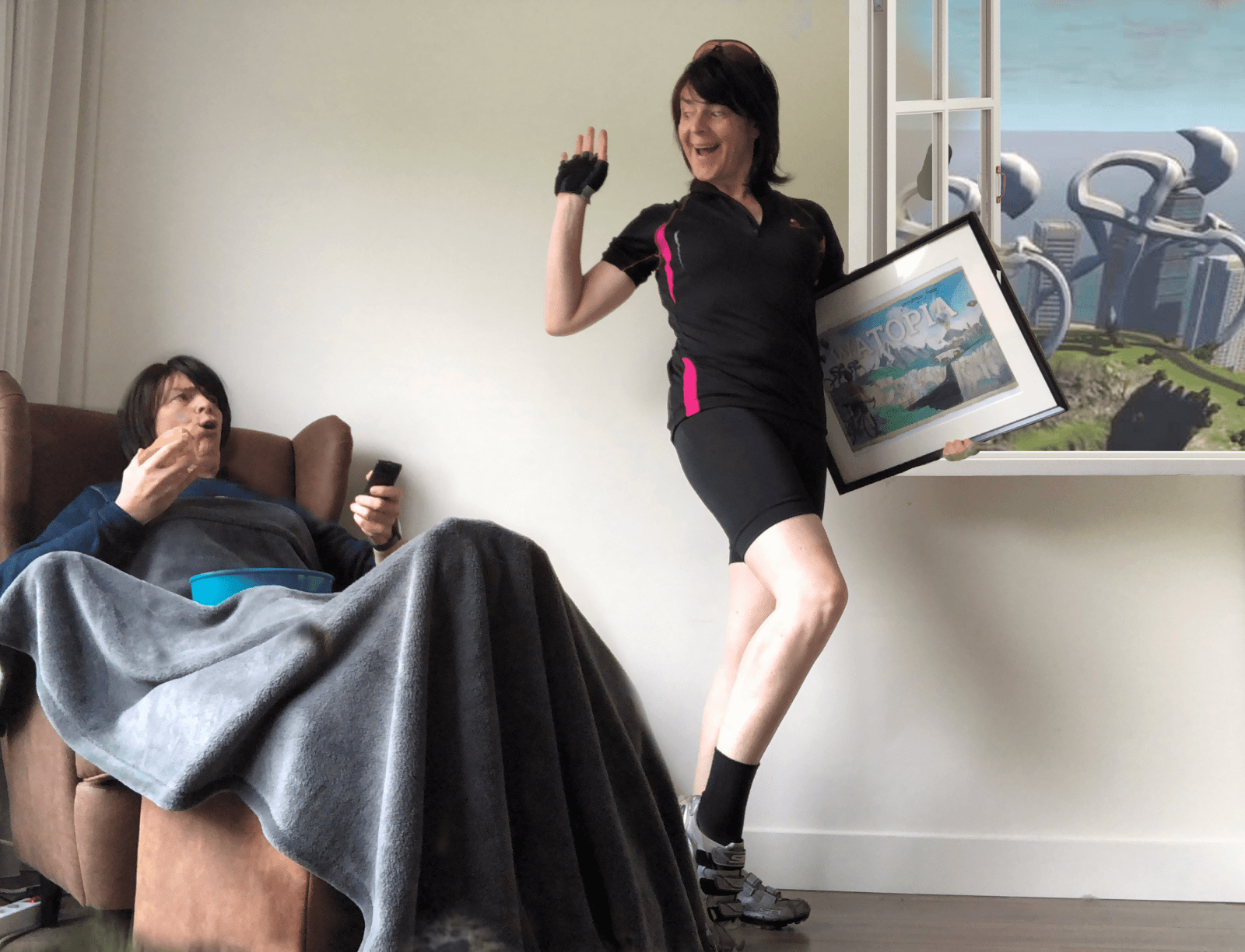 I soon got the feeling that my Zwifting experience could be a life changer… Out with the old (couch potato Fran), in with the new (Watopian Fran)…” – The cake in couch potato’s hands references our constant mentioning of cake during group rides and in the ZA Facebook group.