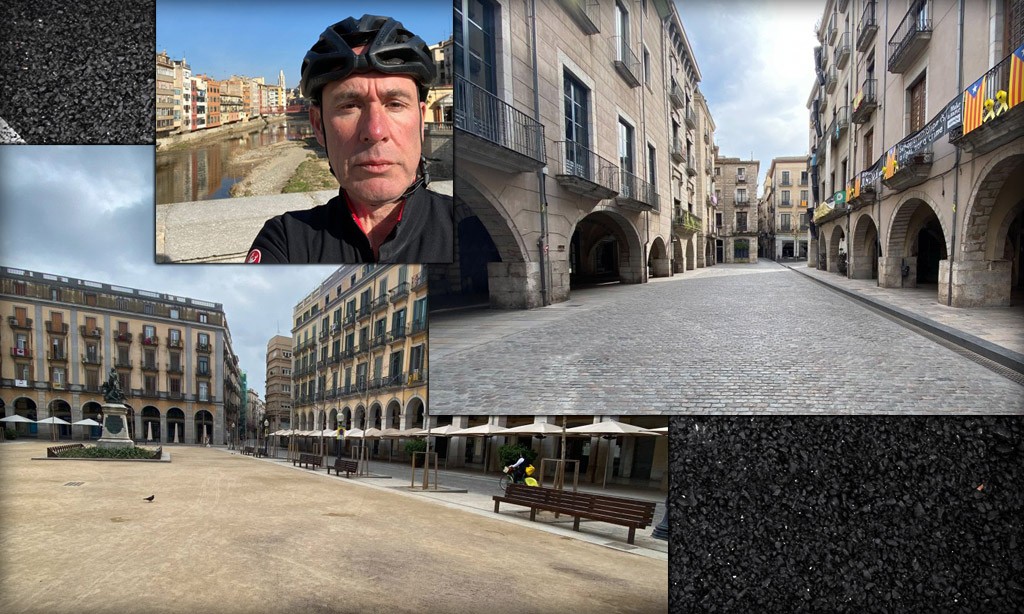 Outside the sun is shining, the sky an unbroken blue. There is no wind. It will be about 22C later. Blissful riding weather in the cycling paradise of Girona, in the heart of Catalonia.

But if I dare to take my bike out, it will be in the sure and certain knowledge I’ll be stopped within moments by one of the many police patrols. If I’m lucky, a ticking off. If I’m not, a substantial fine. If they deploy the nuclear option, as they are newly-empowered to do, I could be thrown in jail.

I’m blessed in having a base in Girona, a step taken after a number of cycling trips here. It lives up to the hype. There is a vibrant local cycling community, daily sightings of pro riders and beautiful smooth roads across varied terrain populated by drivers distinguished by both their courtesy and their rarity.

Now – and for the foreseeable future – this idyllic combination may as well be on Mars as 30 metres from my front door. And it hurts.

The cycling ban – there’s a similar one in France – is real. This is not a Virus Myth or an unenforced gesture by a desperate government. There is no leisure or professional cycling. Utility cycling is permitted – but best make sure you have full documentation as you will be asked for it.

As an avid and lifelong cyclist whose day is not complete without a ride and whose move here was motivated mainly by cycling, I support the ban completely.

I’m not alone. The ban is being impeccably observed by the emigrant cycling community, the pro rider community and the many local cyclists. We don’t have a choice, of course, but I’ve heard not a syllable of dissent expressed.

Frustration? Yes, that’s inevitable. But the idea behind the ban, that pursuit of our hobby or even profession, could result in a crash which takes up much-needed healthcare resource is one for which I have heard nothing but unwavering support.
We can’t ride and that’s not great. Hospital beds are about life and death, and that’s different.

I’m hearing that just as strongly from the pro riders based here, who I speak to as part of my work making The Zwiftcast, a podcast for Zwifters. There was talk of them being allowed dispensation but the position remains unclear. And those I’ve spoken to not only don’t want to ride into the headwind of public opprobrium, they also want to do their civic duty.

We’re also united in our support for the cycling businesses here in Girona which are a big part of the local community. It is no exaggeration to say that they have been devastated by the cycling ban.

Their revenue, all of it, has vanished just as the peak season was about to start. Their premises are closed by government decree. Their expensively-acquired fleets of hire bikes lie idle and there is no end in sight. There’s not much we can do, in reality, to help but we’re doing our best, even if it’s only moral support.

Coping with the change of circumstance

So how are we coping? Well, obviously, the huge upsurge in numbers on Zwift has been swelled a little by the marooned Girona riders. Many of the yoga and pilates classes we used to go to have moved online. The smarter cycling cafes and craft breweries are doing deliveries. And there’s a lot of turbo trainer swapping and sourcing going on.

We’re just a week into an initial 15-day lockdown – it looks as though another two weeks is inevitable and nobody would be surprised by a further extension beyond that.

My coping strategy is helped by the fact that I can shift my trainer outside to the terrace, where I not only get a killer view of the deserted and silent Old Town but also precious fresh air.

From there I can see the twin radio masts on top of the famous Rocacorba. Are they taunting me or are they reminding me that when all this is over, they’ll still be there?

It’s the latter because they will still be there as will all the glorious routes, the dappled climbs, the cool pine forests and the joyous runs to the coast. When the mind drifts off the jostling pixels on Zwift, that’s where it goes.

Hear more from Simon on The Zwiftcast >

Hi Simon, condolences to you and the biking community all over the world. I live in Indianapolis Indiana, USA. The Governor just ordered “shelter in place,” bicycling was not on the exempt list. While I would not be arrested, my being out riding would caused the entire biking community to be scorned and labeled bad citizens. Zwift has been a God send. I’ve been averaging more than 1000 imperial miles the last 4 months. I was ready for outside but I will be ZWIFTING until the shelter in place, is lifted. RideOn!

It’s hard times for sure, but as long as we’re healthy we willget through it.

Hi Simon, thank you for your insights and willingness to share them with the world. We are praying for Italy (and the rest of the world) with faith that “this too shall pass.” Zwift has been a fantastic way to stay connected and I’m glad you have a way to interact while being in lockdown. I keep telling my friends (and anyone else who will listen) WASH YOUR HANDS, because I like ya! Ride On my friend and I’ll see you in Watopia.

I’ll look out for you in Watopia! Ride On friend

Hi Simon (and everyone reading)!
The same situation here in Austria (the weather not so warm, windy, but beautiful blue sky 😢).
Ride on to all, see you somewhere, sometimes.
My plan was holiday in Provence with Mont Ventoux in September…

All plans on hold – but Ventoux will still be there when this thing subsides. Ride On friend!