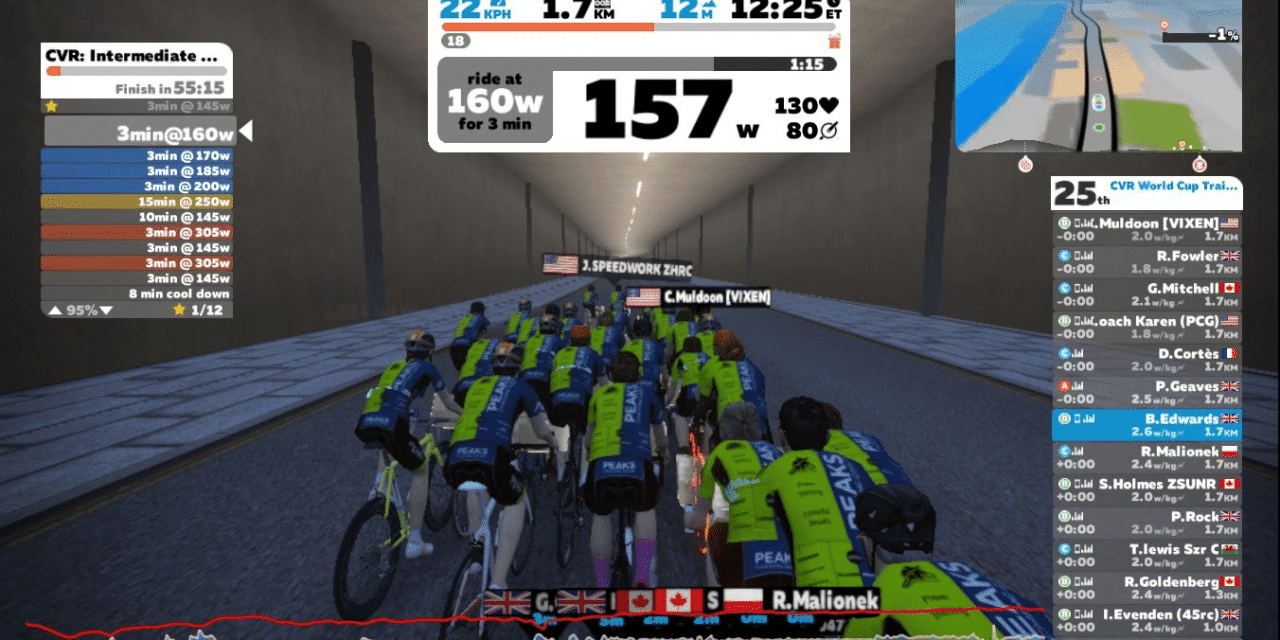 This article is not so much a “review” but more my reflections and opinions on the CVR’s cycleFAST training plan (a structured 8-week training plan designed by Peaks Coaching and delivered through Zwift) which I undertook at the beginning of the year. I’ll tackle what didn’t work so well before discussing my personal performance improvement then making some recommendations on what to consider when thinking of signing up for the plan.

Why I Signed Up

In late December I had just recovered from a bout of illness and the usual festive excesses when I got an email advertising the CVR (Cycligent Virtual Racing… I think) training plan. The subject line read as follows “Attention- CVR WC League Participants- Please Read.” The CVR World Cup League is a Zwift race series spanning 8 weeks for the main season. Races take place on Tuesdays across 8 time zones and there is a focus on encouraging live-streaming and turning Zwift racing into a true e-sport. Race categorizations are decided by your race history (much like IRL systems) and this attracted me as I have a good FTP but generally was getting my arse kicked in the A cat (see “Why am I getting beat by people with lower W/kg”)! Having signed up for the CVR league some weeks before I was intrigued and read on… “You are in the League. However, I want to help you punch your ticket to enter the ‘Performance’ bracket.” I had no idea what this meant but read on and what was being offered was the following:

The way the scoring for the live final selection works is a bit complex, but first riders are categorized based on their power profile from the data collected during the training plan. Then, within your category you score points to rank you against your power peers based on how many of the workouts you completed, race results in CVR races, attendance to some mandatory group workouts (more on this later) and your improvement from your initial to your final test results.

To me this was a very much a “why not” type of situation. First of all I’d never done a structured training plan before but to me $79 for a plan designed and “tailored” by Hunter Allen sounded like a bargain. Then throw in the chance to go to a training camp and race in a live final… why not! I answered a brief questionnaire to determine which plan to put me on and signed up.

The first day of the plan was the 1st of January which, as Hunter explained in a later webinar, was perhaps slightly ambitious. Basically things weren’t quite ready. It took me quite a while to work out how to access the “training app” and actually access the workout sessions. When I did run into problems I found the forum was very active and a good place to find help with Hunter himself making an effort to reply to the queries which was great to see. Overall the learning curve for getting up and running (or riding) wasn’t too steep.

So I embarked on my training quest. Week 1 was a testing week to establish your baseline fitness and your FTP which is used to scale the workouts to your ability. The testing brought more teething problems. The CVR workouts seemed to be transferred from Training Peaks and converted into a Zwift workout .zwo file. In the test file some of the free ride “test” periods had already been prescribed wattages (confusing and meaningless for erg mode), also some of the recovery steps had been removed and it was generally a bit of a mess. Luckily I had examined the file beforehand in the workout editor, spotted some of the mistakes and put them right. I managed to get 285W for my 20 minute effort (271W FTP) down from my all-time PB of 300W (285W FTP) achieved last summer. As the plan went on the workouts improved in terms of mistakes but there were still some problems and annoyances which I won’t bore you with here. Basically it looked like whoever was transferring workouts from Training Peaks to zwift were not familiar with performing or creating workouts in Zwift.

The rough template of the week for me was as follows:

In addition to this the 8 weeks were organized as follows:

Week 2 I did my second CVR race on Tuesday then noticed that each Thursday I had a group workout scheduled. I checked Zwift events to see which one I could attend… 12 noon and 2am CET on Wednesday/Thursday (I live in France). Given that I work full time and value a reasonable daily routine this was out of the question. Eventually the organizers responded and workouts were added on a Wednesday evening European time (although probably too early for UK riders to make it home from work) and on Saturday afternoon (which is fine if you have no plans). However, due to my schedule these “catch all” group workouts were introduced a bit too late in the program to be useful. In the end I managed 2 group workouts over the 8 weeks. This was despite it being revealed halfway through the plan that 5 group workouts were mandatory for a chance to go to the training camp. 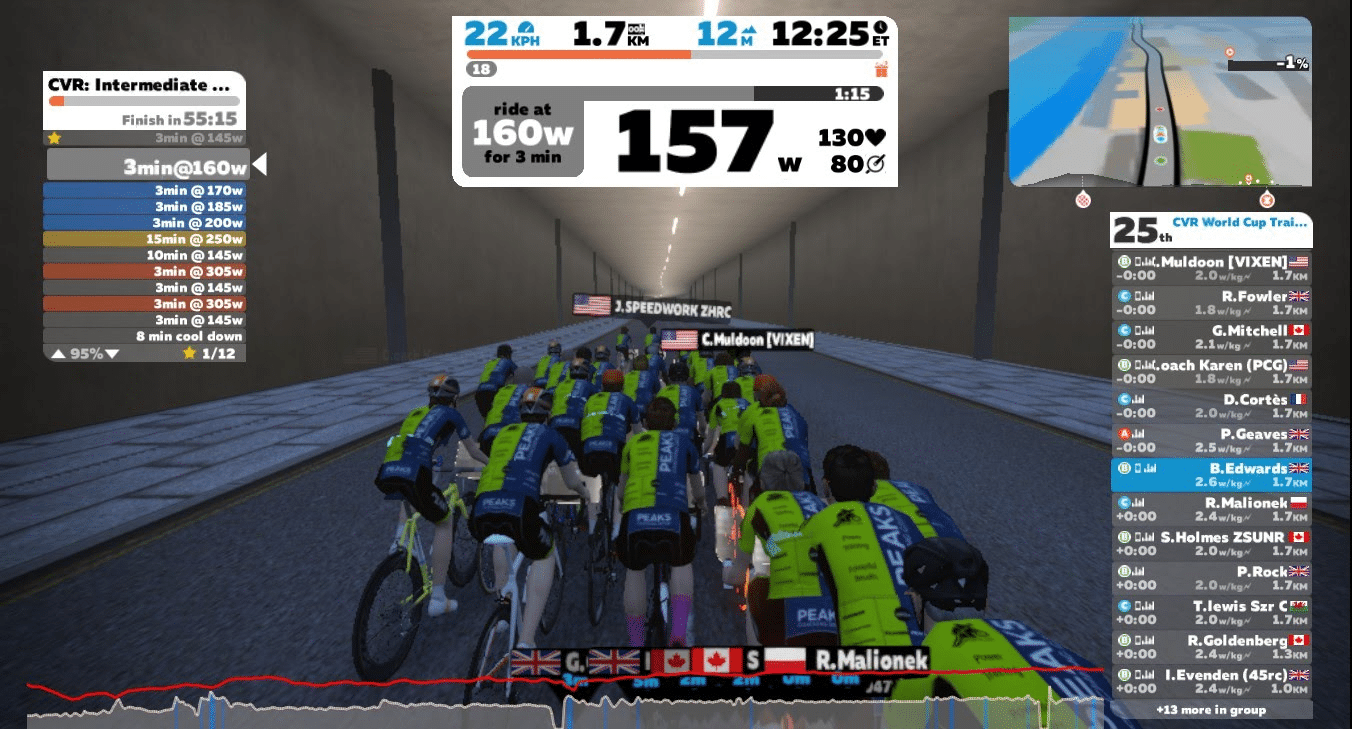 It was originally stated that CVR racers (racing in the world cup league) would be scored on their top 2 race results and that the other participants would have to undertake 2 CVR training races.

This was then changed in week 3 and all racers had to do a special weekend race on week 4 or 8 (which I did on week 4). This was changed again in week 7 and all participants had to complete at least 2 special training races on weekends 4 or 8. I had known for some weeks that I would be away that final weekend so again I was unable to complete the second mandatory criteria for a shot at the final. 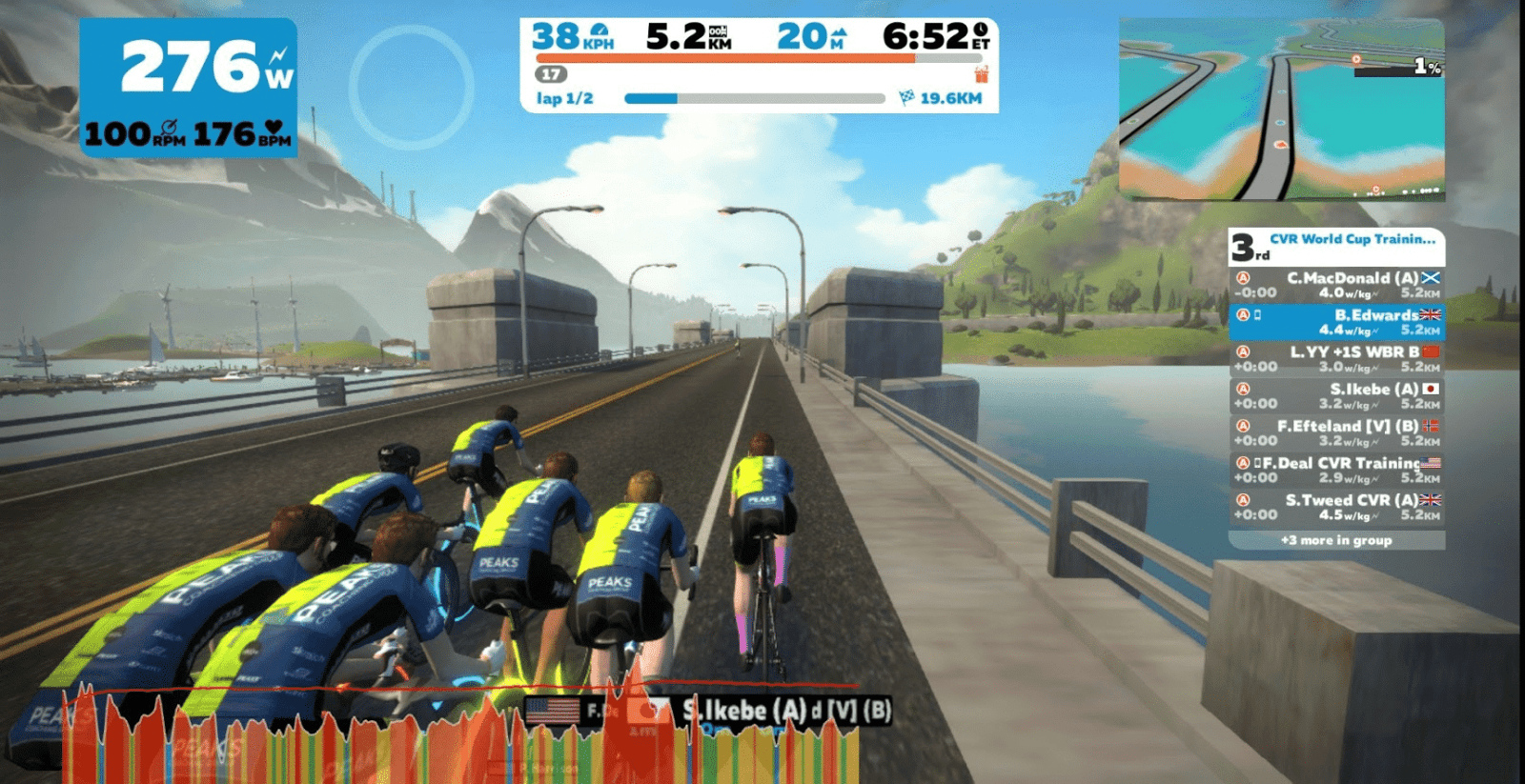 The final aspect of the scoring I want to discuss (complain about) was the “compliance” criteria based on how closely you had stuck to workouts. Again what wasn’t made clear from the beginning was that if there was a workout on your plan for a specific day you had to upload a .fit file of 90% or more of the planned duration to score compliance points. If you do 2 or 3 workouts that day that add up to the planned duration it doesn’t count unless 1 of the files is at least 90% of the length of the planned duration. I suspect this is from a wish to do everything “automagically” – as Hunter is fond of saying. But ultimately this seems nonsensical and surely it can’t be difficult to devise a system to add up activity durations… and again the scoring system for this only became clear towards the end of the plan. I think my compliance scoring was around 50% in the end despite exceeding the weekly hours on the plan in all weeks but 1.

The most annoying thing wasn’t that I’d failed to meet the criteria to go to LA because the criteria was never clearly communicated from the outset, it was the lack of an apology or admission from the organizers that they had made a mistake; instead the attitude was “just get on with it.”

Mistakes are to be expected. This is the first time, to my knowledge, that anyone has attempted the mass commercial distribution of training plans through Zwift or tried to work out how to rank trainees against each other, but my impression was that ultimately all this rule changing and moving goalposts were to make the organizer’s lives easier without a thought for the demands on the lives of the paying customers who are balancing training with work, their social life, family and relationships.

So that’s quite enough whinging about the scoring, the big question is: did I get any positives out of the training plan? In a word YES. Not only did I get to do some new sessions both indoors and outdoors (6×6 FTP session outdoors was one of my favorites), and get to try out a structured training plan, I also saw some impressive gains. First I accidentally took a PR on one of my favorite training climbs (I was going hard but not expecting a PR). I then targeted some other favorite climbs in the area and took convincing PBs. I also got a new PB in the final FTP test of 304 for the 20 mins (289). Watch my FTP test below…

For the data nerds here is a summary of my improvement over the plan duration:

The numbers don’t lie and I was ecstatic with the results I yielded over such a short period of time, going from feeling below my best to smashing summer PR’s on power numbers and Strava segments. I’m also performing a lot better in races, being initially placed in the D category in the CVR league (I had a low ranking based on previous race performance in conventional A cat – in reality I should have been placed in at least C but that’s another story). I will be competing in the B cat next season and have had much better results in some non CVR A races (i.e. not last!).

Also a shoutout for Zwift racing: I’m convinced that a large part of the improvement I saw was as a result of racing on Zwift. If you haven’t tried it yet I thoroughly recommend it for a fantastic workout. Another consideration is that the consistency of the training plan along with minor changes in my diet resulted in weight loss that helped improve my performance.

The bad (with some additional points):

Would I recommend the plan?

Yes if your primary motivation is improving your training, getting stronger and getting a taste of what you can achieve with structured training and don’t already have a coach.

No if your primary motivation is getting to the live final and you also lead a busy life, work, travel, especially if you live in Europe (unless they address the aforementioned flaws which I hope they do).

Am I glad I paid my $79 and took part? Absolutely! I love that people are using Zwift to distribute quality training plans at a reasonable price to a global community and simultaneously trying to grow Zwift racing as an e-sport. I can’t wait to see how it develops and to follow the live finals. 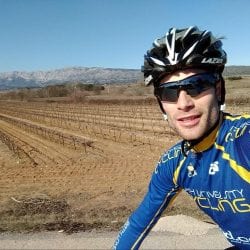 Bruce is a British engineer, cycling enthusiast and self confessed zwiftoholic. He lives in the south of France and enjoys discovering epic rides in the surrounding regions and drinking wine (sometimes simultaneously) on the weekends. Find him on Strava.