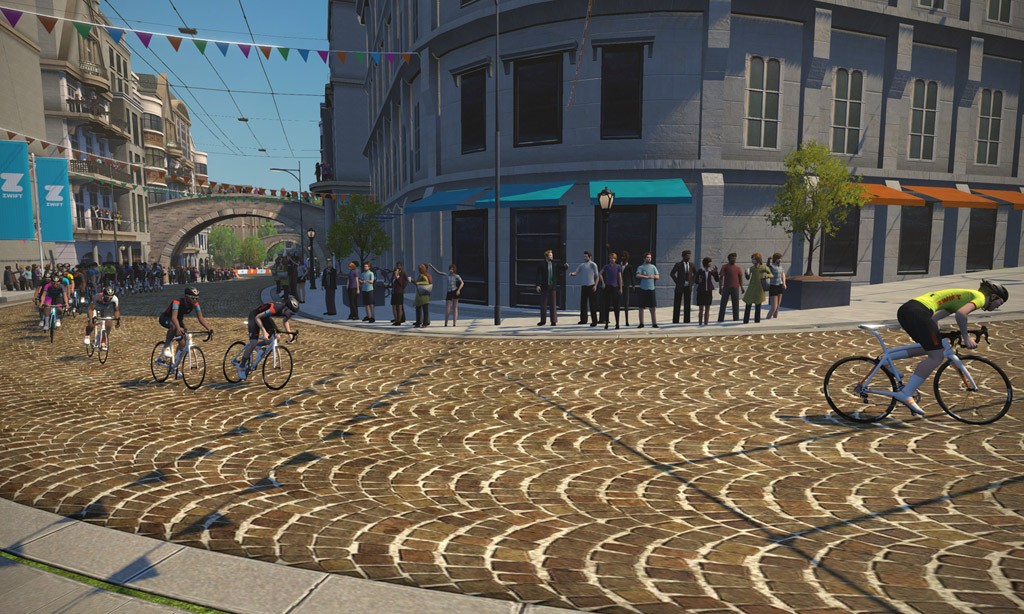 Zwift has issued an official press release covering Crit City, Zwift’s newest map. They have also confirmed that events will launch on the new course this week. (Our guess is Zwift is waiting for their latest update to roll out to iOS users before scheduling Crit City events.)

Crit City will be an event-only course designed to deliver racing that is both fun to watch, and fun to play.

Designed “explicitly with racing in mind”, the course is just 1.9km in length, with 26ft in elevation gain per lap. It is clear Zwift has put some thought into the course layout, attempting to create a very crit-like course. They say:

Similar to real-life criterium circuits, the circuit weaves its way around the tightly packed buildings of Crit City over cobbles and sweeping roundabouts. Dead turns and a couple sections of parallel road allow a few opportunities to keep a close eye on either the breakaway or the chasing bunch.

This course is for racing, not sightseeing–but Zwift has still thrown in some fun visuals including:

Criterium racing is in Zwift’s DNA. The press release quotes Zwift CEO Eric Min saying, “As someone who grew up racing crits as a junior, I’m really excited to test my legs in Crit City. Criterium racing really is an art form, and I’m sure that racing this course will be no different. Knowing how to conserve energy and when to make your move is critical when racing for the win. I know that this is something that our racing community will love.”

This was rumored to be an event-only course, and now Zwift has confirmed it.

What exactly does event-only mean? It means that, unlike guest maps such as Yorkshire or New York, Crit City can only be experienced by joining an event on that course.

This is how the Bologna TT course behaves as well. This is done because, with so many Zwifters on the platform, these smaller courses simply can’t be opened up to everyone to free ride… they would be too crowded!

Zwift says events taking place in Crit City will have “Crit City” included in the event title. Here’s a saved search on ZwiftHacks’ events tool which will bring up all events scheduled for Crit City. Use it to find these events as soon as they’re scheduled.

I’m really looking forward to this course! The racing side is what I enjoy most about Zwift but I do wish that Zwift would schedule more races whereby you race with your Cat only. It is so annoying to have all 4 together as you can’t keep track of who is where. Hopefully we will see more I cat only racing with this map 🙂

I totally agree about the separated categories, Ryan! I basically don’t race those combined events, because I just want to race against… the people I’m racing against!

Hoping they disable time gaps, prevent draft around corners, enforce max speed for tight turns (like the one in London), and use feedback from the test labs. 🙂 Innovate or die.

Love the ideas! Especially the max speed on tight turns…

Honestly happy to race a new route though 🙂

With the surface depending rolling resistance it should be “easy” to design turns that do slow you down by a lot. Especially for this racing course this could make the racing more like a Crit, less like a bunch TT with a sprint at the end.

Any ideas when the first race is going to be? I keep checking with no results!

I raced it today. It was fun. You only see your own cat. Loads of sandbaggers though. I went from 21st up to 16th after eliminations in Zwiftpower.
Btw Eric, on your mobile site, your popups are quite annoying. Can you just make one small one please? The second one fills the screen and for some reason is difficult to remove.