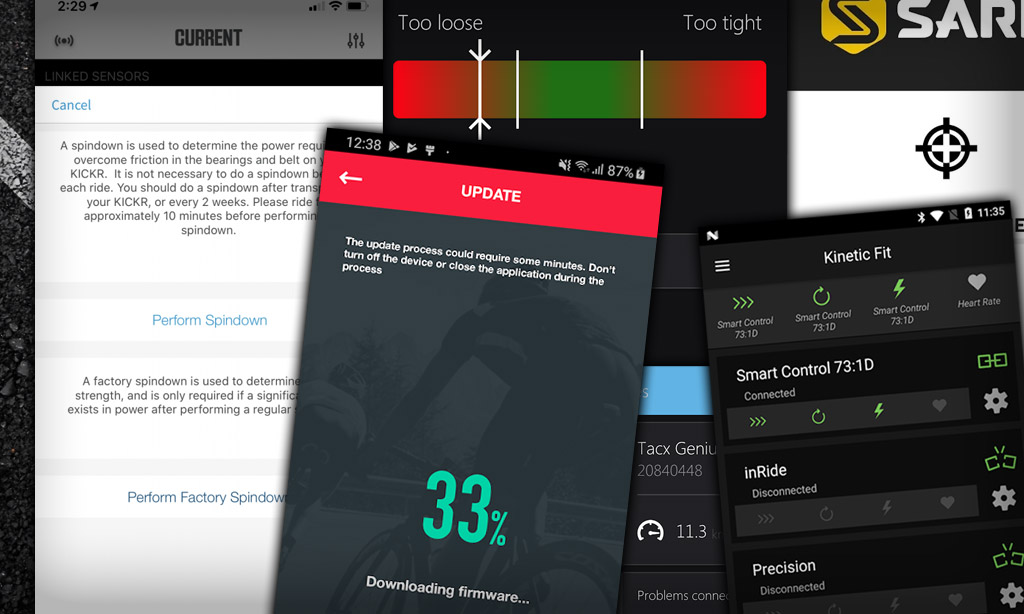 Most Zwifters realize that smart trainers are complex, expensive electronic devices which require calibration and properly-functioning firmware in order to operate properly. Yet many riders have never calibrated their smart trainer or checked for updated firmware!

Calibration and Firmware: the Why and How

For all but a few smart trainers (including the Tacx Neo line, the new Wahoo KICKR 5, and most smartbikes) calibration is necessary to ensure power readings are accurate. Zwift’s pairing screen has a built-in calibration utility which supports many smart trainers, but we advise Zwifters to use the manufacturer’s app since the maker of the trainer knows best how to calibrate it.

Firmware is the code which tells the trainer how to operate – updates typically result in increased power accuracy, more stable operation, and a better overall ride experience.

Almost all manufacturers have mobile apps that allow you easily update your trainer’s firmware and perform any necessary calibration. But if you don’t read the instructions, you may never know it!

In researching our Smart Trainer Index, we’ve compiled a list of support apps from trainer manufacturers. We thought it would be helpful to publish it as a standalone resource, so here it is!

The 4iiii app (called "4iiii Device Configuration" on Android) lets you update firmware and calibrate your 4iiii devices. It also lets you change some settings on your Fliiiight smart trainer, which may be necessary depending on wheel size.

Although reviews are less than stellar, the Toolkit app from Bkool is supposed to enable owners to update the firmware on their Bkool trainers. It doesn't work well/reliably, but it's your only option apart from contacting Bkool support.

Elite's support apps are a bit confusing, because they use their main app (myETraining) for calibration, and a second app for firmware updates.

The myETraining app is quite powerful, although Zwifters probably won't use any of its features beyond calibration.

Giant's simple RideLink app allows you to update firmware and calibration on your Cyclosmart trainer. It also gives you basic control functions for your smart trainer, which most Zwifters will never need.

The JetBlack Cycling app includes tools for calibrating your JetBlack trainer, as well as a host of training features that make it one of the more useful apps from a trainer manufacturer.

Use the Kinetic Fit app to calibrate your Kinetic trainer as well as update firmware. It also includes features which let it control your Kinetic smart trainer from your mobile device for ERG workouts, and a paid option for more advanced training plans.

Magene's Utility app is quite basic, but it does what it needs to do: allow you to calibrate your Magene trainer, as well as update its firmware.

Oreka's Training app lets you control and configure your Oreka trainer or rollers, as well as update firmware. Since their devices do not require calibration, the app doesn't support it.

Use the Saris Utility app to update firmware and calibrate your Saris/CycleOps trainer. It also has simple ERG-mode controls.

SRM appears to be behind the curve when it comes to supporting its products via mobile apps. Their eIT app lets you control your SRM Indoor Trainer, but firmware updates and calibration are accomplished via other means. There does not appear to be an Android version of the app at this time.

The StagesPower is very basic in terms of functionality, but that's fine for most Zwifters who are just looking for its key features: calibration and firmware updating.

The Tacx Utility app can be used to upgrade the firmware on your Tacx trainer, as well as calibrate any Tacx trainer that requires calibration. This app is notoriously finicky, though - calibration of wheel-on trainers can be especially tedious. If at first you don't succeed, tweak the tension adjuster and/or tire pressure, then try again!

The MyCycling app can be used to calibrate your trainer. Presumably it also delivers firmware updates, although the app documentation never mentions such. The app also allows you to control your Technogym trainer for ERG workouts, and includes premium training options for a fee.

The Thinkrider Tools app is quite basic, but allows you to update firmware and calibrate your Thinkrider smart trainer.

TruTrainer's SmartLoad app allows you to calibrate your rollers as well as update their firmware. It also lets you control your rollers in various modes and modify parameters for bike type, weight, and road conditions.

Use the Wahoo Fitness app to perform spindown calibrations (including advanced factory spindowns) as well as firmware updates on your KICKR trainers. The app also lets you configure other devices in the Wahoo indoor ecosystem such as the Climb and Headwind, as well as control your trainer for workouts.

Use the Xplova Workout app to calibrate your Xplova trainer and upgrade firmware. Includes ERG workout and route simulator functionality.

Good reminder – I probably need to do this. But we are doing renovations in my pain cave right now, and the weather is incredibly nice, so I can get by for the nexst month or two riding outdoors.﻿😃﻿

You forgot to mention the app from the Spanish guys: Oreka App for their funny O5 trainer