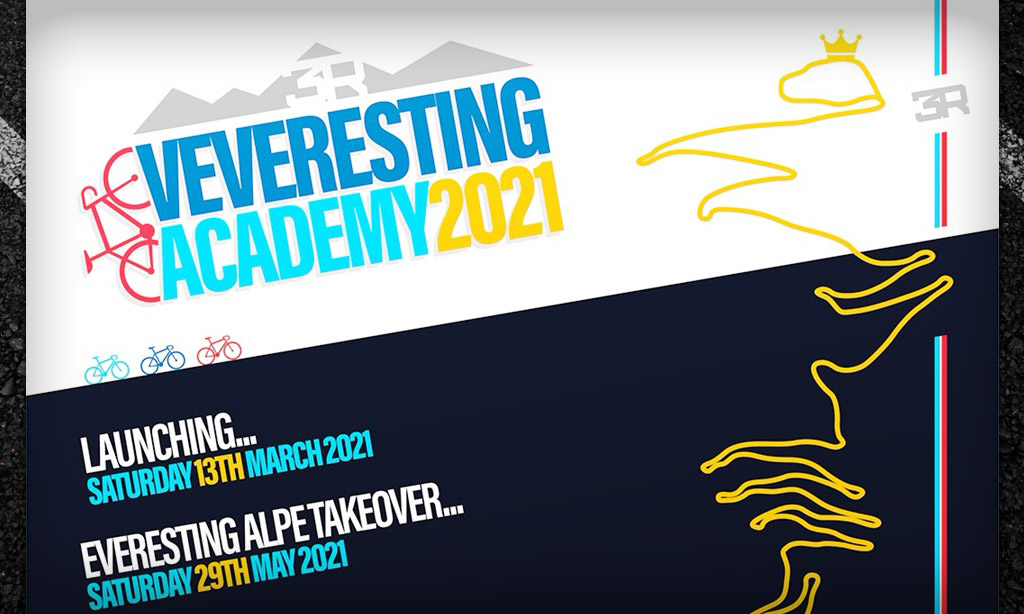 vEveresting.  Ever fancied it? It’s one of those challenges which appears too daunting for some to even contemplate undertaking! Others have the idea that this would be good to attempt, but then the reality of the scale of the task becomes clear – the possibility of 10+ hours in the saddle is just a bit too much.  And there are a select few who actually fancy the challenge…

Everesting has built up its own language and cult following and has thrived as a concept during the global pandemic. It was originally the brainchild of the Hells 500 Cycle Club who are also the custodians of the Everesting Hall of Fame. There are different rides and challenges that individuals can complete to enter the Hall of Fame, be awarded badges, and unlock the ability to buy real life kit via the Everesting shop.

The newly-announced 3R vEveresting Academy aims to give riders the ability to complete a supported Basecamp (half the height of Everest) or full vEverest ride. In Zwift terms, a full Everest requires 8.5 repeats of Alpe du Zwift.

Team3R have put together a series of weekly training rides with the aim of helping people to train and build up the necessary strength, mental fortitude, and stamina to complete the daunting vEveresting challenge on May 29, 2021. The Academy has been put together to provide a COVID secure program and endurance challenge which cannot be impacted by lockdown regulations.

Each week, starting from March 13th and lasting for 12 weeks, there will be guided rides on the Alpe which will be hosted at a variety of times, making the Academy accessible to people across different time zones.  There will be seven rides each week – three of which are set up as formal group rides in Zwift and four of which will be managed as Meetup rides.

All rides will be led by 3R Ride Leaders who have all completed a vEveresting themselves, so they are well-qualified to help and support you.

The Academy is the brainchild of George Parker-Fuller who heads up the Raise part of 3R (Ride, Raise, Race). George will happily tell anyone who will listen that he is an 82kg ZwiftPower Cat C who, at 45 years old, has successfully completed a Base Camp, vEverest and Roam (400km distance: 10km ascent) challenge year – and that with the right training and mindset, any reasonably fit cyclist can get involved in the Academy and the challenge.

The training rides will mostly take place on Alpe du Zwift. Scheduled group rides on Thursdays and Saturdays will be the main cornerstone of the training program where there will be guided Alpe repeats with the program building the number of ascents up the Alpe, topping out with 4 ascents on Saturday May 8 and Thursday May 13.

Anyone can join the Zwift events, but it’s recommended that you sign up to the Academy by joining the Facebook group at facebook.com/groups/4998456793557693/ or emailing [email protected].

In addition to leading riders during their training, 3R Leaders will join their Academy teams during their challenge on the day. Riders who sign up to the Academy will also get physiotherapist-approved exercises to help with injury prevention and advice on nutrition.  In addition, Team3R has secured a 30% discount from Veloforte who harness nature’s finest ingredients to produce the world’s finest all-natural nutrition.

In return for joining the Academy, Team 3R would like people to try and raise sponsorship for the charity World Bicycle Relief.     World Bicycle Relief is an international, non-profit organisation that specializes in large-scale, comprehensive bicycle distribution programs to aid poverty relief in developing countries around the world.

Once training has been completed, the main assault at the vEveresting Challenge will take place on May 29.  There will be groups of riders at different phases of the challenge, depending on what time zone they have started in. With 107 riders already signed up for the event, it’s going to be a busy day on the Alpe!

There will be four Base Camp rides setting off at six hour intervals with the first at 7am GMT and two vEversting rides setting off 12 hours apart (7am and 7pm GMT). The aim is to take over Alpe du Zwift for a 24-hour period.

The plan on the day will be for the Ride Leaders to keep to a steady 2.5w/kg. This is a marathon and not a sprint and the aim will be to maintain the 2.5 w/kg pace for the whole of the ride. In time terms this translates to 75 mins per ascent and the plan will be to have breaks after the 3rd and 6th laps for food, showers, and general refreshments. One beauty of doing the challenge on the Alpe is that you get ten minutes of free time after each ascent while your avatar descends!

For those who complete the challenge and raise the minimum sponsorship, there will be a prize draw with prizes from two of the  partners who are sponsoring the event – Veloforte and Marmot Tours.

The Academy program and event is endorsed and supported by Hells 500 and Saris, who as part of their ongoing support will donate $5 per purchase between 19th – 29th March 2021 to the fundraising for World Bicycle Relief.

Interesting, but – missing information on what are the conditions since everesting.cc website states limitations on use to certain bike trainers – specifically to smart direct drive ones due to slipping of on-wheel ones on ascents over 9%, which Alpe du Zwift has – is this still applicable or is there any excerpt for Zwift event series?

There are two challenges, the zwift everesting badge and the Hells 500. However, I do agree that they should tell folk that they need to make certain requirements for the Hells 500 accreditation.

That’s what I’d like to know — I ride a spin bike on zwift (bowflex C6 with erg) and it doesn’t “count” for V-everesting as far as I understand — any insights?

Hi Cate, I have a Schwinn IC8 which I believe is the same bike as the bowlflex. how does it work with the ERG?
Many thanks.

People can join the academy and the training plan and the mass vEvereting day on any trainer. In order to be included in the Hells 500 Hall of Fame riders will have to comply with the Hells 500 requirements. Any rider on any trainer can complete and unlock the Everest badge in Zwift

I’ve done an outside and virtual Everesting at a very average 3.5w/kg and the vEveresting is easier with the off bike recoveries on the descents and the easy access to all sorts of food from your fridge. Both of them are type 2 fun but an incredible feeling of achievement when completed and remember they are eating challenges at their heart!