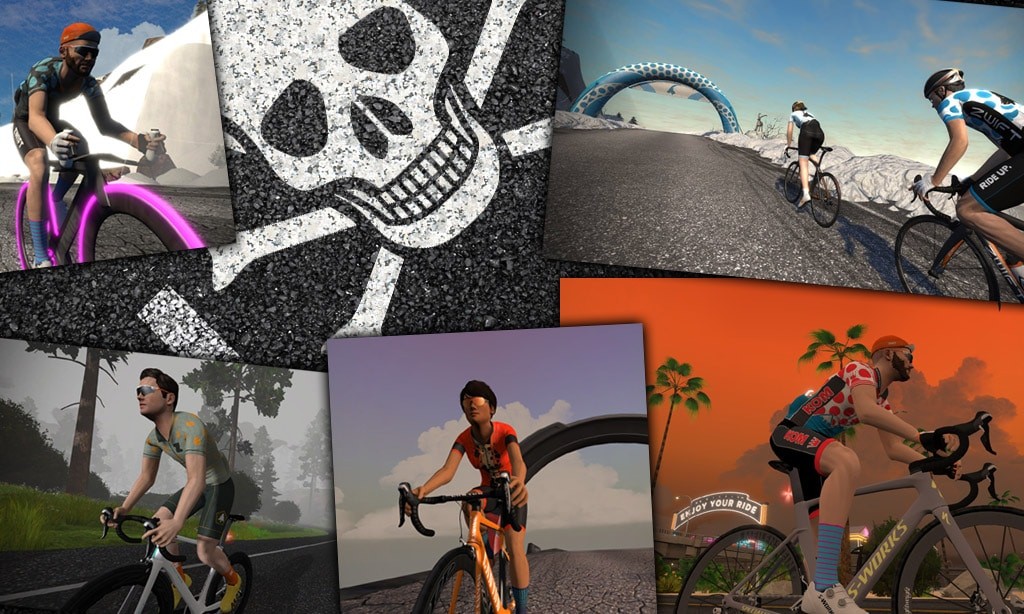 This Rebel Route is our most challenging yet. The goal: to ride up every timed KOM segment on Watopia (no official routes do this, at least not yet). As such, this is KOMonster version 1. When a new KOM segment is added to our favorite virtual cycling paradise, we’ll have to create version 2!

The reward for your rebel ride? Exploring a new route, knowing you’ve gone where few Zwifters have gone before. And a Strava segment rank in the tens or hundreds instead of the thousands!

This big route was designed to cover every KOM on Watopia in the shortest distance possible. Clocking in right at 100km, completing this ride also means finishing a metric century on Zwift.

The route begins at the downtown start/finish banner, and we hit the Hilly KOM forward first, before continuing on up and over the Epic KOM reverse.

Descend the Epic KOM and turn toward the desert, then hang another left into Titans Grove where we’ll climb Watopia’s newest KOM segment. Once that’s done we get a bit of recovery as we make our way back to downtown Watopia and over to the Volcano to climb the Volcano KOM.

After the volcano, take the land bridge to the Italian Villas and hit the Hilly KOM reverse. Then head out to the desert again and into Titans Grove for a go at the reverse Titans Grove KOM.

Out of Titans Grove and up the Epic KOM forward… we’ve only got one more climb left. But it’s a big one! Descend the Epic KOM, turn toward the Jungle, then climb the Alpe. The route ends when you cross the finish banner at the top. Nice work!

As expected, the route is quite pointy. At 25.7 meters of climb per kilometer of distance, this route is the 7th climbiest in game, just behind Bologna Time Trial and just ahead of Four Horsemen.

When freeriding, select the Hilly Route. This will get you started in the right direction, but you will have to make many manual turns to finish this ride.

Here are the turns you’ll need to make to successfully complete the KOMonster:

What, no radio tower? It seems a shame to skip it if you’re doing everything else. Other than that a fantastic route though.

Seems wrong that there’s no KOM on the Tower, should be a timed segment of it’s own. I don’t miss it though, always feels laborious taking it on so it’s not my favourite stretch of Watopia!

I think that it skips the Radio Tower because it prevents you from getting the REVERSE KOM since you turn off just before reaching the official arch.

how to do this route without getting lost

Maybe it’s just me, but I couldn’t successfully navigate this route. The turns no longer seem to present themselves as described. I don’t know if some additional turns have been introduced by virtue of the “undiscovered roads” that came with the recent Zwift update (i.e., the four new Watopia routes), but I got frustrated after two failed attempts and gave up. Would really like to do this one!

Hello, this is my last rebel route to complete and I’m struggling with the directions and new signs. Bit of a tough one to keep redoing, Any chance we could have new directions? Many thanks in advance, I’ve enjoyed targeting all routes and badges, Jen

Comforting to know it’s not just me, Jen. I’ve taken three cracks at this one and gotten lost fairly early on (generally, shortly after the KOM descent). Hopefully, we’ll see an update to the directions soon. Meanwhile, having studied a zoomed version of the route map in VeloViewer, I’m going to take another, hopefully better-informed, crack at this sometime next week. I’ll try to document all the turns I take and, if successful, share the details.

Following up, Jen. I’m working on this. Got through the first 50+ km of this today and have confirmed the navigation to that point. I plan to get through the remainder within the next couple days (i.e. by Wednesday, at latest). Here’s a link to a Google sheet where I’m documenting the turns: http://bit.ly/KOMonster. The lines in red font at the bottom of the sheet, if still present by the time you view the sheet, have yet to be confirmed. I’ll comment again once the navigation has been finalized. Meantime, if you have any feedback on the format/content, please let… Read more »

Rode this in its entirety successfully today, and I’ve updated the navigation at http://bit.ly/KOMonster. I supplied the “distance from start” as an approximation of when each of the turn prompts appears but, depending on where you’re spawned on the course when you start your ride, those values could be a little off. You may have to do some “mental math” as you go along, but I think I’ve captured every single turn required, regardless of whether it’s the default or you have to manually select it. Good luck!

How fabulous! Very much appreciated, can’t wait to try it out ! It will probably have to wait for 2 weeks though. Thank you again! And congratulations to you, hope you enjoyed it, Jen

Thank you Tony! Completed 🙂 all great. Third time lucky. Thank you so much for excellent directions, Jen