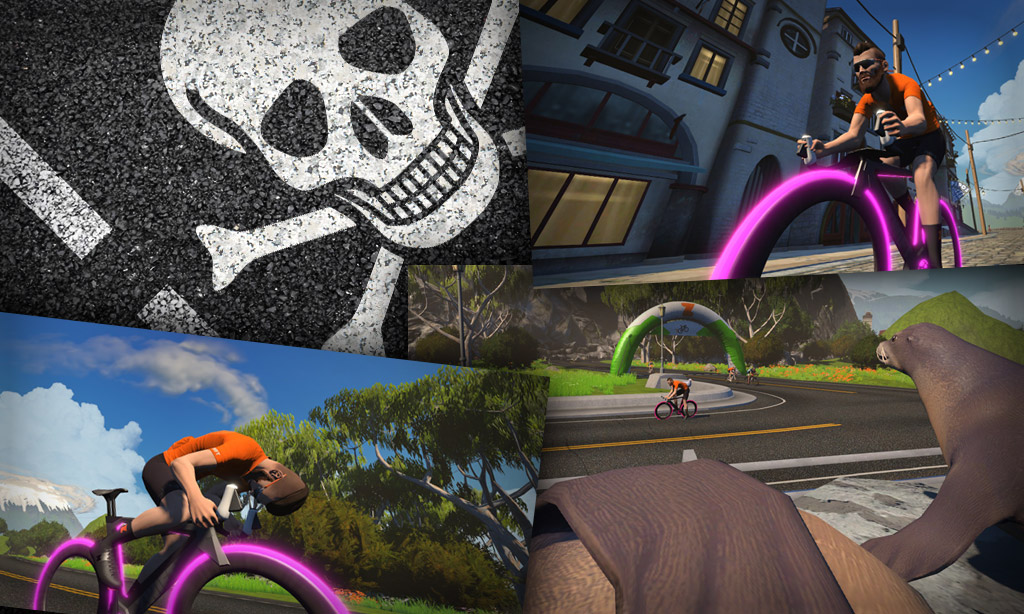 Our newest Rebel Route is the shortest route currently in-game (inclusive of official routes and Rebel Routes), shorting the Crit City routes by just 2-3 meters. This quick circuit would be perfect for crit-style races, closely matching the Crit City circuits in terms of lap distance and elevation gain.

You’ll have a short lead-in before you can begin the circuit, and you’ve got options, with four different directions roads all feeding into this circuit! (The Esses, the Volcano, Ocean Boulevard, the Hilly KOM all drop you onto this loop eventually.)

The quickest way to get here, though is to select the Two Bridges Loop route. This will take you over the Esses and the JWB bridge. Flip a u-turn after you go through the sprint banner, then turn a quick right onto the new bypass road to start the circuit.

The circuit starts and ends at the green sprint banner. From the banner you’ll hang quick right past the sea lions, then ride along the water before turning right at the fountain to head back toward the Italian Villas.

You’ll hit a couple small rises here, then descend in similar fashion past the waterfall and onto the cobbles of the Italian Villas. Planning to sprint? Time to rev up those watts – the start line is just up the road!

The Watopia Sprint Forward segment begins just before you enter the tunnel, then it’s an all-out effort for 350 meters. That’s one lap… how many more do you have left?

There are many ways to get to this circuit, but the quickest is to start by choosing the Two Bridges Loop route. This will take you over the Esses and the JWB bridge. Flip a u-turn after you go through the sprint banner, then turn a quick right onto the new bypass road to start the circuit.

Here are the turns you’ll need to make to successfully complete the Italian Villas Sprint Circuit, starting in downtown Watopia after selecting the Two Bridges Loop:

If turned into an official Zwift route, this circuit could be given an interesting lead-in which would make for exciting racing.

For example: in a short race, the lead-in could take riders over the Hilly KOM Forward, breaking up the race by making a selection of punchy climbers. Then organizers could select an appropriate number of circuit laps (perhaps 4-6) during which heavier, more powerful riders would have a chance to pull back that punchy breakaway.

A longer climb could become part of the lead-in as well, perhaps the Volcano KOM, finishing with several flatter laps of the circuit.

would it be so difficult for Zwift to have a list of approved community submitted routes? why are they letting people do things the hard way?

Wouldn’t it be even easier to start by selecting the new Two Bridges Loop? There would be no need to U turn.

Hey, you’re right! I forgot there’s now a route that goes in this direction. I’ll update the post!

There’s still a U-Turn though?

Hi guys
How about the ocean lava
Cliff side loop
Plus
The serpentine 8
Done in reverse
Any thoughts??

I can only hope that one day Zwift gives us the ability to do custom route builds, would be great for meetup rides!

Have a “Cliffside 8” that starts with the Beach Island Loop, but goes up the Reverse KOM to the new bypass, down the KOM, and right down Ocean Blvd to the Epic KOM Bypass, then down Reverse Epic. At the Marina, go past the fishing village, towards the bridge, but take the shortcut back to the sprint, then left to the Scotty fountain and right around the Volcano to Downtown. Up the KOM, take the bypass, down towards the bridge, and left past the fishing village, up the Reverse Epic to the bypass, left down the Epic and head home… Read more »

This route will surely be a competition route, because I cannot see any other reason for the short cut-off to exist. It basically provides a Watopia/rustic/pizza-friendly version of Crit City,

I just did this one the other day. All the New Roads. Started at the Jungle pens, did the new Mayan road, back up to the Ocean Cliffside, then over to the Italian Village Sprint to catch the new spur to the reverse KOM and then the connector to go down the forward KOM and ended at the Downtown Start/Finish. 25.3 km with 222 meters of climb. 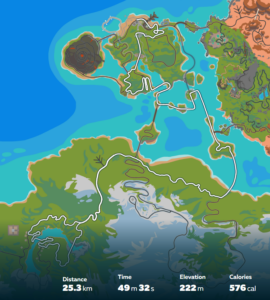 Hi Eric, is this one going to the added to the Veloviewer Zwift Insider Leaderboard?

Where are the instructions for hilly kom bypass loop?? I can see the segment in VV and Strava, but no instructions. Thanks.

does it need any? use the hilly route, then take the left turn onto the short cut at 2.3miles and a left turn at the end of the shortcut to go back to the KOM banner